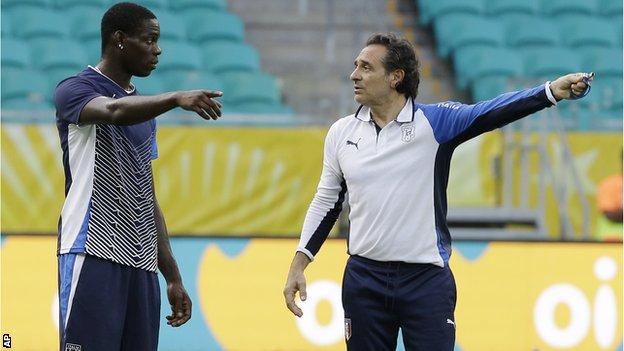 Italy have barred their players from leaving their Salvador hotel for safety reasons, while manager Cesare Prandelli has apologised for saying that Mario Balotelli had been the only player allowed out because he was black.

Security advisors have told the Azzurri they should not venture onto the city's streets, as protests that have marred the Confederations Cup continue.

Prandelli initially said Balotelli had been the only player allowed out because his "colour is different to ours" but later apologised.

"I am sorry," he said. "Before I said something about the colour of our skin. It was a joke. Of course."

It later emerged that Balotelli had been involved in charity work in the city, helping children from some of Salvador's poorest areas. Prandelli said the former Manchester City striker had been mobbed on his venture into town.

"He was surrounded by all these people but he was working with a charity and doing something nice. I am glad we clarified that issue about why he was the only one allowed out," Prandelli said.

Earlier, the Italy manager had admitted that while the Azzurri had no intention of leaving the competition early because of the protests, he was concerned by the escalating violence

The situation has changed from Rio, when we could visit the city with no problems. Here we have been forbidden from leaving the hotels

Speaking before Prandelli admitted that, while they had no intention of leaving the competition because of the protests, he is concerned by the escalating violence.

"Going home is not something we are thinking about," he said.

"But during the days we have been in Brazil the situation has changed from Rio, when we could visit the city with no problems. Here we have been forbidden from leaving the hotels.

"All peaceful demonstrations that can foster the improvement of a country are welcome. When they turn to violence they worry us.

"There are so many people, it is difficult to control those who don't want to demonstrate in a civil manner."

Italy and AC Milan midfielder Riccardo Montolivo condemned the violence, saying: "Violence cannot be accepted regardless of the reason. It should be criticised.

"On the part of everyone, there should be solidarity with those who demonstrate in a civil and peaceful manner because they are suffering. It is the right of everyone to demonstrate and express their opinion."