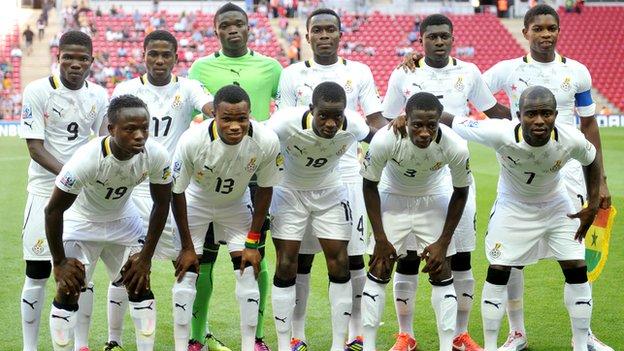 Former champions Ghana began their Under-20 World Cup in disappointing fashion after losing 3-1 against France in the Turkish city Istanbul.

Friday's match marked the first time the Ghanaians had ever lost a group game at the Under-20 World Cup - on their sixth visit to the finals.

The Europeans went ahead after the hour through Geoffrey Kondogbia, with Yaya Sanogo doubling the lead shortly after.

Ahead of the game, Black Satellites coach Sellas Tetteh - who was at the helm when Ghana won the tournament in 2009 - had spoken of his desire to reach the last four.

He had also hinted that winning the tournament would not be "insurmountable" but he may be revising his view after a lacklustre start, with the French dominating the second half.

The game was the West Africans' first at the tournament since winning the 2009 final, after they missed the 2011 edition when failing to qualify.

Ghana play Spain in Istanbul on Monday before their final group game against the United States in Kayseri on 27 June.

Africa's three other representatives at the Under-20 World Cup are Nigeria, Mali and continental champions Egypt.

Nigeria at the U-20 World Cup

Prior to Ghana's 2009 success, no African side had ever won the Under-20 World Cup - despite various triumphs in the Under-17 finals as well as at the Olympic Games as well, a tournament for Under-23 players.

In Group B, Nigeria lost their opening game 3-2 against Portugal.

The Portuguese led 2-0 at the break, courtesy of two first-half strikes from Bruma and Aladje, before Abdul Ajagun scored twice in 10 minutes to draw the Flying Eagles level.

Bruma then hit his second of the game in the 69th minute to give the Portuguese the win, leaving the Nigerians with a uphill struggle, as they seek their first under-20 world title, in their tenth appearance at the finals.

In Group D, Mali had to settle for a 1-1 draw with Paraguay in their opening match, despite taking an early lead.

The lead was short-lived with the favourites Paraguay drawing level four minutes later courtesy of a strike from Jorge Rojas.

Having started on Friday, the Under-20 World Cup ends on 13 July, with the final in Istanbul.