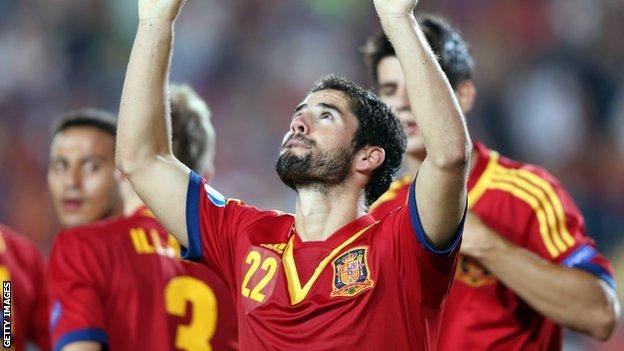 City have yet to make a formal offer for £22m-rated Isco, who was instrumental in Spain being crowned European Under-21 champions.

But the 21-year-old is a prime target after working under new City boss Manuel Pellegrini at Malaga.

Tevez, meanwhile, has been linked with AC Milan and City may consider offers.

Isco at the 2013 European Under-21 Championships

The 29-year-old Argentine has only one year left on his contract and a new one is not in the offing.

After the turbulence of the past, Tevez's current relationship with City is very amicable.

But it is certain they will demand considerably more than the £10m mentioned in speculation linking him with a switch to the San Siro.

City have been busy in the transfer market since the end of last season.

Should the move go through, Isco would become the club's third close-season signing after the £30m arrival of Fernandinho from Shakhtar Donetsk and Jesus Navas from Sevilla for £14.9m.

City hope Isco's close relationship with Pellegrini and the prospect of regular football at City will prove decisive when negotiations get under way.