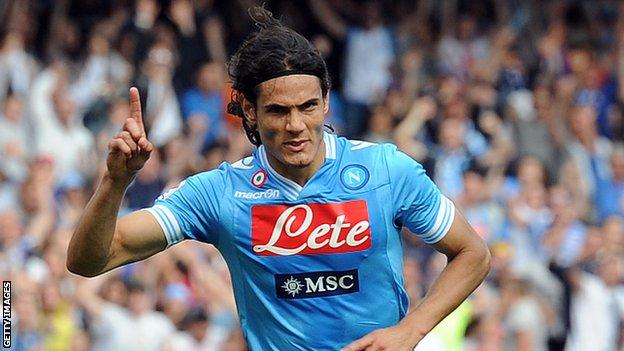 Cavani, 26, scored 38 goals for the Champions League qualifiers last season, form which has seen him also linked to Real Madrid and Chelsea.

But City appear to no longer be in contention for the Uruguay striker.

"Manchester City have not the money to pay for Cavani, they say, 'We don't pay that'," the 64-year-old said.

"The Abu Dhabi [owners] have said they will never spend 63m euros for Cavani. They say, 'We can give other things', but they are not in the interest of our club."

Speaking at the unveiling of Rafael Benitez as the new Napoli head coach, De Laurentiis went on to say that Real are the only club to have made a firm offer for Cavani.

He added Napoli had "never received a call" from Chelsea about the player, with Uefa's Financial Fair Play regulations cited as a barrier to any deal as the loss-reducing rules are "conditioning everybody" to not spend large sums on transfers.

Cavani scored three goals in two games against City in the Champions League in 2011, and found the back of the net in the first leg of Chelsea's eventual 5-4 second round aggregate victory against the southern Italian side in the same competition a year later.

He is currently on international duty with Uruguay in the Confederations Cup in Brazil, where he set up Diego Forlan's crucial Group B winner against Nigeria in Salvador on Thursday but failed to impress in front of goal.