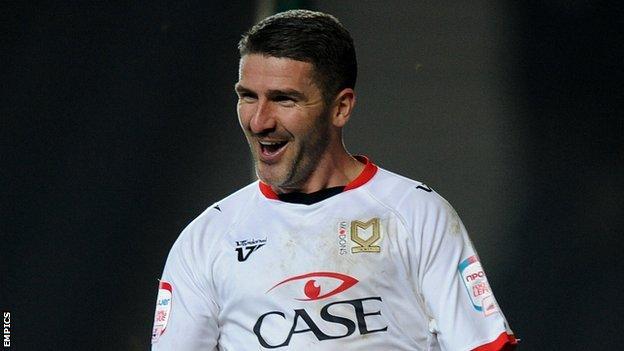 Lowe, 34, had spoken of his desire to move back to Merseyside and, having agreed a two-year deal, will see his contract come into effect on 1 July.

"I've been after Ryan for some time," manager Ronnie Moore said.

"I'm really pleased to finally be able to bring him to Tranmere. He's scored goals everywhere he has been and was joint top scorer at MK Dons last season."

Lowe, who has played most of his career in northern England, scored 12 goals in 51 games in his only season at Stadium MK after arriving from Sheffield Wednesday last summer.

MK manager Karl Robinson said: "A motivated Ryan Lowe is a top forward in this league, but for the reasons he stated to me earlier this week, I didn't think he'd be in the right mindset to help take this club forward."

Lowe set a Bury record by scoring in nine consecutive games during the 2010-11 season when they were promoted from League Two.