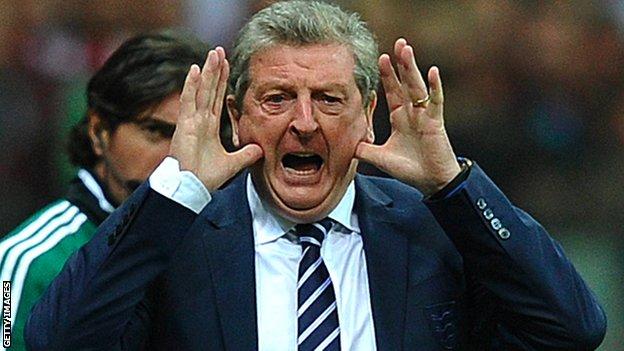 Once again this week there has been the distant rumble of dissatisfaction around the corridors of Wembley Stadium at the perception of the Premier League's lack of interest in the fortunes of the England team.

Nothing official, just rumblings, briefings, call them what you will.

It was the publication of the fixtures for next season that jolted the subsonic waves. At two of the regular meetings between the Football Association and the Premier League, the matter of fixtures and the impending World Cup qualifiers came up.

No official requests were made, nothing formal, just the nuanced suggestion that any help around the timing of matches and the way in which the teams were paired would be gratefully accepted.

From Roy Hodgson's point of view, of course he would prefer not to have his squad members from Manchester United and City, Arsenal, Tottenham, Chelsea and Liverpool knocking chunks off each other in the last league games before an England call-up.

When the fixtures were crunched in the computer, and threw together Liverpool versus Manchester United, and Arsenal against Spurs on 31 August - six days ahead of a vital World Cup qualifying game against Moldova - it is fair to speculate Hodgson was not best pleased.

England sit second in Group H, two points behind leaders Montenegro but with one game in hand. The Moldova fixture is followed by an away game against Ukraine on 10 September.

Hodgson's future as an England manager probably rests on his ability to guide the team through the remaining group games and through to a berth in Brazil.

Those six days before the Moldova game could be reduced to five if the broadcasters re-arrange their weekends to maximise their audiences and one, if not both the games, end up taking place on 1 September instead.

"PL fixtures are said to have justifiably upset Roy Hodgson. AFC v THFC & LFC v MUFC just days before vital qualifiers. Never help ourselves! Onus now on Sky and BTsport to do the right thing and leave the games on Saturday. Time to put nation's interests before their own." In response to some fans indicating they do not care about the national team, he added: "I guess this justifies the Premier League's disregard for the best interests of England."

Those rumblings carry with them the whiff of an implied lack of patriotism, of self interest. Business before the greater good, and t'was ever thus.

Former England striker Gary Lineker, who scored 48 goals in 80 international matches, wrote on Twitter: "Onus now on Sky and BT Sport to do the right thing and leave the games on Saturday. Time to put the nation's interests before their own."

The underlying tension between the FA and the elite clubs predates the formation of the Premier League.

Club versus country rows did not start in February 1992, but the creation of the league remains symbolic in the relationship between the clubs and the FA.

It was the point at which the governing body had to accept the commercial interest of the clubs, and the power that enshrined entitled them to a certain amount of self determination.

The Premier League is a trade association of clubs, and as such has no remit to help the national team, just its members.

On its website, the Premier League declares that: "we do not operate in isolation, instead we work proactively and constructively with our member clubs and the other football authorities to improve the quality of football both in England and across the world."

Of its relationship with the FA, it says: "(The FA) is also a special shareholder of the Premier League. It has the ability to exercise a vote on certain specific issues, but has no role in the day-to-day running of the Premier League, and that includes determining the fixtures."

In fact, there are other agencies who have a role in deciding who plays whom and when, notably the police.

It is a complex business of arranging the fixtures so rival fans in a particular area are not playing at home on the same day and then spilling out into local town and city centres together.

It requires input from the Football League as well, and changing one fixture can impact across all four professional leagues, and dozens of games.

All of that said, I have yet to meet an English member of the Premier League's staff who does not want the England team to be doing very well, and the relationship between FA chairman David Bernstein and Premier League chief executive Richard Scudamore is respectful and productive.

There is clearly far more that unites than divides them.

In the end, all managers, be it for club or country, are obliged by the pressure of results to put their own interests first.

Yes, a little bit of help with the fixtures would have been welcome, perhaps the Premier League could and should have done more.

But I imagine its also been whispered where the Premier League is based at London's Gloucester Place: "It's still only Moldova at home."