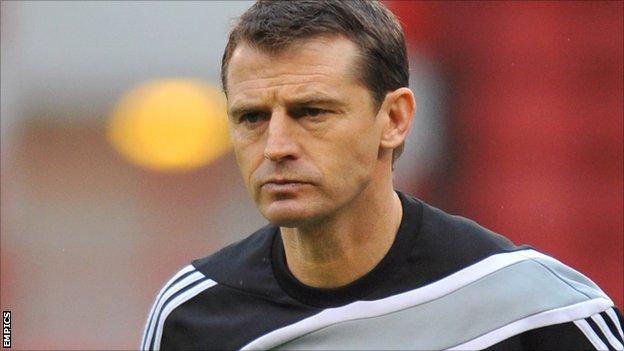 Hartlepool United manager Colin Cooper has said he and assistant Craig Hignett are already working on bolstering the squad for the forthcoming campaign.

following the and will lead the bid to return to League One after relegation last term.

"We've got a list we believe in," Cooper told BBC Tees.

"I believe it's the right thing, there won't be a lot of rest time. Players will be working hard physically, technically and in turn mentally, so it'll be good for them.

"We're trying to get them as fit and strong as we possibly can, really the training time is the most important in pre-season.

"If players go into pre-season games fatigued, that I don't have a problem with that, it'll do them good in the long-run. The idea is to get them into shape for Rochdale."

"It's now about seeing how many we can tick off that list to make Hartlepool's squad stronger for the coming season."

The former England defender and Hignett have been juggling their new roles with a pre-committed hike to the top of Mount Kilimanjaro in aid of the Finlay Cooper Fund - set up to support children's charities in memory of the son Cooper's family lost after an accident in 2002.

"Myself and Craig have made a lot of calls, even on Kilimanjaro to agents and players," Cooper continued.

"We're working very hard, it's difficult at this time of pre-season, there's not really much give.

"People are hovering and eyeing up their own options, we're working hard on a couple at the moment, and many more behind that.

"We'll keep ringing and making contact with people, we've been inundated with calls from agents and we'll work our way through them."