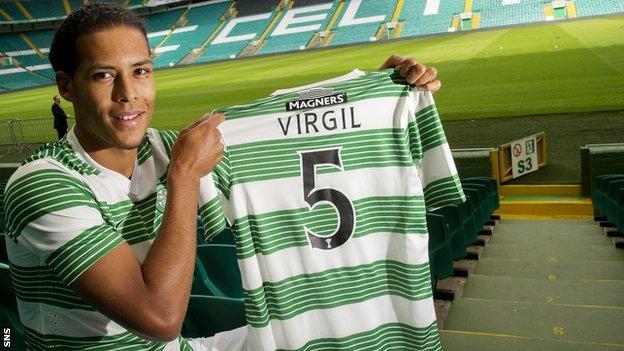 Netherlands Under-21 centre-back Virgil van Dijk has signed a four-year contract with Celtic.

The 21-year-old has joined in a £2.6m deal from FC Groningen, for whom he made 37 appearances last season, with a 10% sell-on fee for the Dutch club.

"It feels very good and I'm very excited to be here," he said.

I'm a strong defender and I'm good in the air, but I also like to play football on the ground, and I hope that we'll do even better than we did last season

Van Dijk moved to Groningen from Willem II in 2011 and had two years left on his contract at FC Groningen.

"Celtic is the biggest club in Scotland and they also play in the Champions League," he said.

"They're a fantastic club and when Celtic came in for me I was so excited. Everything here is good so I can't wait to get started.

"I hope to play many games for my country in the future but first of all I want to make things happen here.

"I'm a strong defender and I'm good in the air, but I also like to play football on the ground, and I hope that we'll do even better than we did last season.

"I think I can bring something extra to the team and we will see how it works out.

"I'm ready for everything. I love to play football but I do love getting into duels."

With central defenders Thomas Rogne moving on, Rami Gershon's loan expiring and Nigeria international Efe Ambrose missing the start of the season while he plays in the Confederations Cup, Celtic manager Neil Lennon has moved swiftly to ensure there is cover and competition for places for the forthcoming season.

Centre-half is Kelvin Wilson's natural position while Charlie Mulgrew can play there, at left-back or in a more advanced position.

The Champions League qualifying draw will be made on 24 June, with Celtic's first match scheduled for 19-20 July.