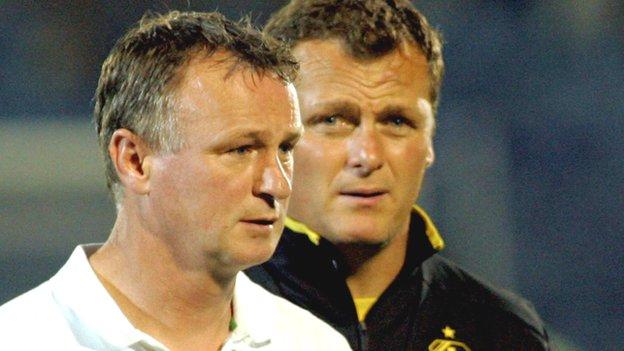 Former Northern Ireland player Jim Magilton has been appointed elite performance director by the Irish FA on a four-year contract.

The 44-year-old will be responsible for all elite player development for boys and girls, and will oversee the IFA's coach education programme.

Magilton was assistant to Northern Ireland boss Michael O'Neill when the pair were at Shamrock Rovers.

We must work collectively and strategically to ensure we cultivate the most talented players, both boys and girls, at all age groups in Northern Ireland

O'Neill then saw off the challenge of Magilton to become NI manager.

Magilton started his playing career at Liverpool, before going on to play for Oxford United, Southampton, Sheffield Wednesday and Ipswich Town. He managed Ipswich and Queens Park Rangers before becoming O'Neill's assistant at Shamrock Rovers.

After missing out on the Northern Ireland job he was appointed manager of A-League club Melbourne Victory, leaving after three months when the season ended when his contract was not renewed.

Magilton will work closely with former international team-mate O'Neill in his new role, which starts on 1 July.

"I am very pleased and indeed honoured to have been offered this opportunity to join the Irish Football Association as Elite Performance Director," said Magilton.

"Player identification and development is a key part of the modern game and I am looking forward to getting started in my new role and to working with all the young players in Northern Ireland.

"We must work collectively and strategically to ensure we cultivate the most talented players, both boys and girls, at all age groups in Northern Ireland.

"I believe that by doing this we can create a talent pipeline which will help to build successful and sustainable international squads of the future."

The appointment comes a day after St Johnstone boss Tommy Wright quit as Northern Ireland goalkeeping coach because of the demands of club management.