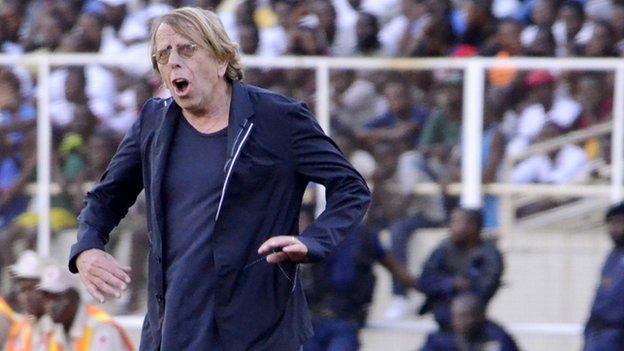 Claude LeRoy has stepped down from his role as coach of DR Congo.

The Frenchman, 65, took charge of the Leopards for a second time in September 2011.

"I told my players that I would stop after two years," said LeRoy, whose last game was Sunday's 0-0 draw with Cameroon in a World Cup qualifier.

"With the team and the federation we've had some terrific moments. I haven't made a decision regarding the next continent I'll work in."

DR Congo will be out of the race to Brazil 2014 if, as expected, the Indomitable Lions are awarded three points after Togo admitted using an ineligible player earlier this month.

Togo have said they will not appeal a Fifa disciplinary case against them after they used Alaixys Romao in a 2-0 win over Cameroon when the midfielder was actually suspended.

It is likely that Cameroon will be awarded a technical 3-0 win that would take them to the top of Group I and mean DR Congo cannot overhaul them even if they win their final qualifier in Togo in September.

LeRoy helped the country qualify for the 2013 African Cup of Nations in South Africa but they failed to advance from the group stages despite not losing a game.

It was the seventh time that LeRoy had taken a team to the Nations Cup finals after previous successes with Cameroon, who he guided to the title in 1988, Senegal and Ghana.