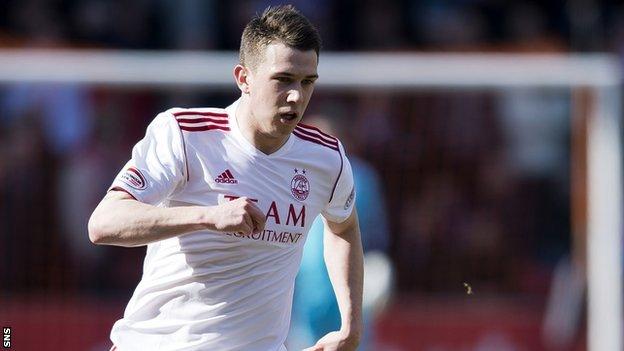 Midfielder Ryan Jack has committed his future to Aberdeen by signing a three-year deal with the club.

The 21-year-old came through the ranks at Pittodrie and has made 79 league appearances.

Jack has won 11 Scotland under-21 caps and was called up to the senior squad for the recent match with Croatia.

"This is a strong statement as we look to rebuild the squad and Ryan will be a very important player within that," said manager Derek McInnes.

Jack told the club's official website he was happy with the direction McInnes and his assistant, Tony Docherty, were taking the club.

"Since their arrival, the manager and Tony have brought in new ideas and I'm excited about the prospect of working with them both over the next few years," he said.

"They are building a strong squad here and one which I hope can really challenge next season. As a local boy I'm delighted I am going to part of that.

"The new manager said he would like to extend my contract and it's something I was looking to do as well. I was delighted with it.

"I know I have still got things to learn. The manager has assured me that he will help me achieve what I want to achieve and help my game along. I was delighted to hear that as well.

"Everyone is really excited about the new season, we have made a few signings and I think it could be a good season."

McInnes added: "It's something we have been trying to move forward since the last couple of weeks of last season.

"We have been stung in the past by young players leaving the club and probably leaving too early.

"I can understand the temptation to go down south but the inclusion of Ryan in the Scotland squad will vindicate how well Ryan has done at Aberdeen.

"Ryan is certainly a player that is only going to get better. He is going to have to keep working hard and looking for that improvement in his game.

"He can play a number of positions but I do see midfield as the position he will predominately play.

"He is a good footballer, he is a great age, a good temperament and a real steel and determination about him."

Meanwhile, Jordon Brown has been released from his contract with the Dons, freeing him to sign for a new club.