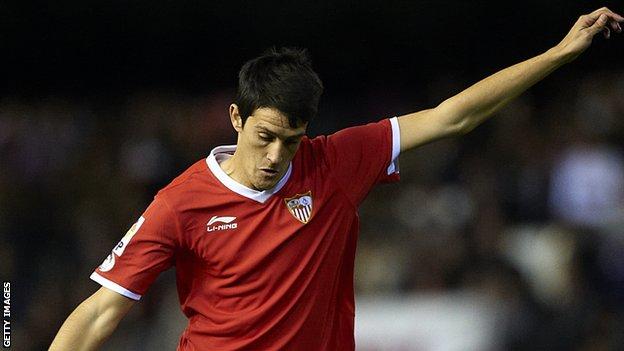 Liverpool have signed Sevilla forward Luis Alberto on a long-term deal for a fee believed to be £6.8m.

The 20-year-old had been on loan at Barcelona B but the Spanish champions decided against taking up their option on the Spain Under-21 international, allowing Liverpool to step in.

Reds boss Brendan Rodgers said: "He has the correct footballing profile and mentality to be a Liverpool player.

"I look forward to working with him to develop his talent."

Alberto made his debut for Sevilla aged 18 in April 2011, but that was one of just seven first-team appearances he made for the club.

The former under-18 and under-19 international played 38 times for Barcelona B last season, scoring 11 goals.

He is set to be joined at Anfield by Simon Mignolet, with Liverpool expected to complete a £9m move for the Sunderland goalkeeper next week.

The Belgium international is expected on Merseyside in the next few days to undergo a medical and complete the formalities of the move.

The Anfield club have already signed Kolo Toure from Manchester City on a free transfer and have a £6.7m deal agreed in principle for Celta Vigo's Iago Aspas which will go through once paperwork has been completed.

Rodgers is also progressing with a move to sign Shakhtar Donetsk's Armenia midfielder Henrikh Mkhitaryan but there may not be a swift resolution to that transfer with Liverpool facing competition from a number of European clubs.

The 24-year-old has a release clause in his contract, believed to be around £20m, and Liverpool are willing to meet it in an attempt to sign one of European football's most coveted emerging players.