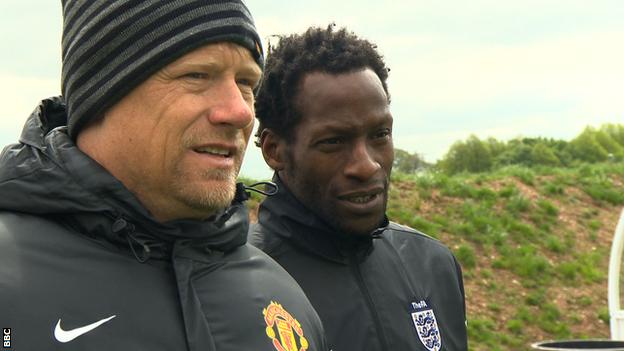 As a cold wind whipped over the east Staffordshire hills last month, Ugo Ehiogu gathered at St George's Park with a group including former Manchester United goalkeeper Peter Schmeichel and ex-Liverpool striker Robbie Fowler to take the next step in his developing coaching career.

Despite the unseasonal conditions, former England defender Ehiogu began his Uefa A Licence in the knowledge that come June he would be joining Peter Taylor's England coaching staff in the heat of Turkey for the Under-20 World Cup.

According to the 40-year-old, the decision - made in April - came as a "surprise".

Tottenham Under-16s coach Ehiogu is in the set-up to gain vital experience in much the same way that ex-Everton midfielder Phil Neville joined Stuart Pearce's team at the Under-21 European Championship.

But former Middlesbrough and Aston Villa centre-back Ehiogu could also play his part in developing the increasing number of black players among England's youth teams.

The England Under-20 squad, which plays its first group game against Iraq in Turkey on Sunday, features three black players among a group of 21. Yet from the under-21s through to the under-17s about 40% of players are non-white. That compares with about 25% in the English professional game.

Ehiogu is one of 30 qualified coaches on a list issued by the Professional Footballers' Association in an attempt to boost the numbers of black coaches in the professional game.

There are only four black managers in England's top four divisions and PFA coach educator Paul Davis believes that increasing this figure will help black players by offering them role models from potentially similar backgrounds. As manager of the under-19s and under-18s, Noel Blake is already a notable example.

It is a notion that Ehiogu agrees with and one that, he believes, becomes more important the younger the player is. But he also recognises that a coach's ability to communicate with players can transcend race, age or social background.

In between coaching sessions at St George's Park, Ehiogu told BBC Sport: "It's like society. Kids want to play football and when they can see or relate to someone who looks similar to them or came from the same area as they did or have the same background or upbringing as them, they can relate to that.

"And when you can relate to someone as a player or an individual you kind of cling onto that so it's got to help.

"However, I remember working with Terry Venables for England. He could speak to players in a manner where they listened, so it's all about having a balance.

"Once you get to professional level as a player it's less of an issue because you've made that grade, but it's probably more from the ages of 10 to 11 up to under-18s or under-19s football. I think that's probably the key where it needs to be better represented."

Ehiogu says that becoming a coach was always at the back of his mind during his playing days.

But despite his insistence that he is still very much learning his trade, there is a quiet determination to make it to the top as a manager.

"When I was coming towards the end of my playing career at 32, you are getting asked by young players about parts of football in and out of the game," he said. "And when you do it three or four times you kind of recognise that you've got something to give back and obviously coaching comes into that."

Fast forward to June and speaking to Ehiogu in Turkey, it sounds like he is already making his mark with England. He says is "impressed and surprised" by the amount of input he has been allowed to provide to the players and it is clear that the tournament-preparation experience he is receiving under Taylor is invaluable.

Taylor, who was brought in to manage the group for two months, said Ehiogu's dedication had made an impression with him and the players.

"It's nice for any young player playing for their country, to see other ex-players who have had the experience of playing international football and who have also had good careers," Taylor told BBC Sport.

"In Ugo's case, he was a big, strong centre-half who played for England and was a tremendous professional. We have some young centre-halves here where all of a sudden I would say to Ugo, 'go and talk to them and explain why you would do certain things in certain situations in games'.

"The most important thing is that anybody who wants to be a coach wants to take it seriously, and that is where I have been impressed with Ugo; he really wants to be a good coach."

Ehiogu, who also played for West Brom, Rangers and Sheffield United in a 20-year playing career, realises that he must gain qualifications and the know-how before he can go on to the next stage of his career.

He has spoken to fellow black coaches who have failed to get interview opportunities despite having the necessary coaching badges, but it does not put him off.

Ehiogu's coaching career might be in its infancy but it appears he is plotting his future in a carefully constructed manner.