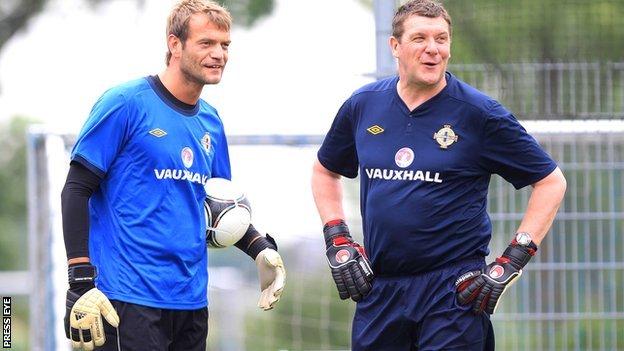 The former Northern Ireland keeper said he was leaving the international coaching role because of the demands of club management.

Wright was appointed to the position in February last year after Michael O'Neill took over as manager.

"Following discussions with my chairman, Michael O'Neill and my family I have decided to step down from the position of Northern Ireland goalkeeping coach," said Wright.

"The decision was not taken lightly but I feel that the demands of being manager of St Johnstone require me to be totally committed to that position.

"I would like to thank the chairman and board of directors at the club for allowing me to work with the international team over the past 15 months and it has been a position that I have been honoured to hold.

"Finally, I would like thank Michael O'Neill for the opportunity to work alongside him and Billy McKinlay (assistant manager) and I wish them and the squad all the best for the remainder of the World Cup campaign."

He has been goalkeeping coach at Norwich City, and at Shamrock Rovers alongside O'Neill.

The Irish FA said it hopes to make an announcement on a replacement goalkeeping coach in the near future.