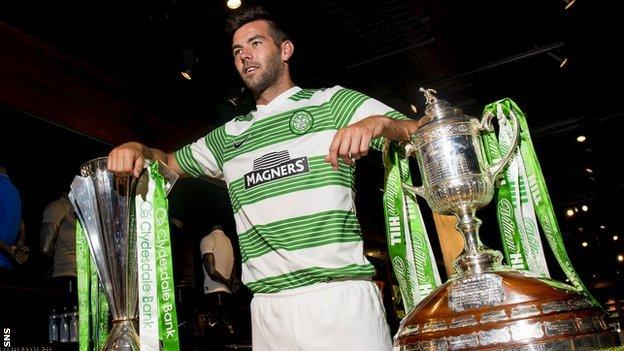 Celtic midfielder Joe Ledley hopes to extend his stay at the club beyond the end of his contract next summer.

"It's a fantastic club and I like living here," said Ledley. "It's a great club and hopefully I can be here for many years to come.

"Hopefully we can qualify for the Champions League. I want to stay here."

The 26-year-old explained he was keen to talk to the club about his future "as soon as possible".

Celtic have already strengthened their squad with the capture of striker Amido Balde, while defender Virgil van Dijk has travelled to Glasgow for signing talks with the club.

And Ledley believes the pair would be "two great additions to the team".

"Glad to get players in early and give them time to gel in to the way we play and to get to know them as well," the Welshman told BBC Scotland.

"Hopefully, we can get the other one [van Dijk] signed now as soon as possible.

"We've got early qualifying rounds [for the Champions League] to look forward to so hopefully we can get a lot of players in before then."

One player who has been linked with a move away from Celtic Park is Victor Wanyama but Ledley hopes his midfield colleague will stay.

"Playing with him in midfield and working with him, we know he's a fantastic player and hopefully he can stay for many years to come."