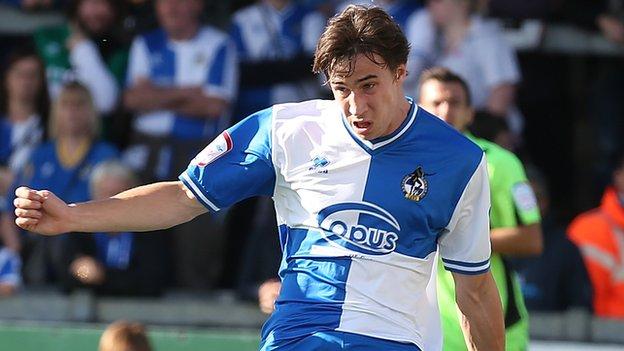 Fabian Broghammer says he decided to stay at Bristol Rovers because the English game will help him progress.

The winger, 23, arrived at the Memorial Stadium from the regional German leagues last summer.

Rovers took up the option of a further year on his deal and Broghammer opted to stay in England, despite being given the option to return home.

"It was a tough decision but I know the football here will give me a better opportunity than in Germany," he said.

"I spoke to my girlfriend and my family, as I had another option which would have made it easier to be around my family, but I think it was the right decision in the end."

He's certainly got talent and has got something exciting, so hopefully he can reproduce that

Broghammer was brought to Rovers by former manager Mark McGhee and made his debut against Oxford in August.

He went on to make 37 appearances but admits he struggled to adjust to being a full-time professional.

"When I first came here I found it quite rough because there are 46 games in a season and I've never done that before.

"I feel much stronger now than when I first came here. I know where my strengths are now and where I can use them.

"Last season was good for me as an experience."

Rovers had a difficult start to last season under McGhee and he was sacked in December with the Pirates second from bottom in the Football League.

John Ward returned for a second spell in charge and they finished the season 14th in League Two.

And Broghammer believes they will continue that form into the 2013-14 campaign.

"I think we can look ahead with a bit more confidence than we did at the beginning of last season.

"We've got all the injured players coming back so we've got a strong team for pre-season.

"I see us in the play-offs and aiming for promotion."