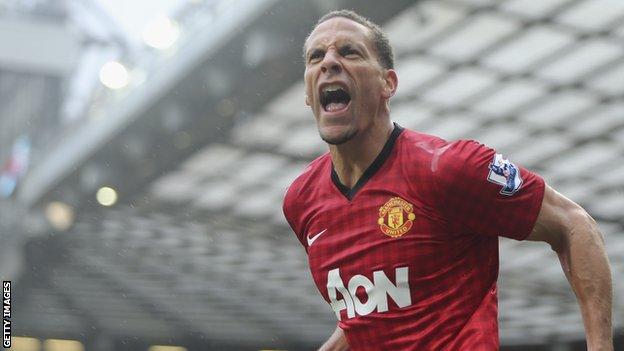 "This will just really focus the guys and when we come back into pre-season we know we have to hit the ground running," the defender told the BBC.

"This could be a blessing in disguise for the new manager and for the squad."

United begin the defence of their Premier League title away at Swansea on the opening weekend before Jose Mourinho's Chelsea visit Old Trafford.

Moyes's side then go to Anfield to face Liverpool before hosting Crystal Palace and then making the short trip to the Etihad Stadium for a derby with rivals City.

Ferdinand added: "We don't think about the reaction if we start badly. We expect the results to go our way and to do well.

"We have a hard run of games but that is part and parcel of being a top footballer, you have to be ready at all times.

"If we finish that run of five or six games at the beginning of the season and we're in good shape, who knows what is possible."

Moyes will officially take over as United manager on 1 July as he replaces the retired Sir Alex Ferguson, who won 38 trophies during his 26-year reign.

Former Everton manager Moyes, who spent 11 years with the Toffees, has yet to win any major silverware in his managerial career but that does not concern Ferdinand, who had never lifted a trophy prior to joining United from Leeds in July 2002.

"You have to start somewhere. I never won anything before I came to Man United and in my first season we won the league," he said.

"I'd like to think David Moyes would be able to do the same thing. He's a football man, very passionate and just the right ingredient we needed at the club when Sir Alex Ferguson left.

"I'm sure the new manager will implement a little bit of his own style and culture into the squad.

"I think that will be a good thing and will freshen up the squad. Hopefully he will bring even more out of the players than before."

Ferdinand is expecting Mourinho's return to increase Chelsea's chances of winning the title but the United defender believes it is good for the Premier League that the ex-Real Madrid boss is back after almost six years away.

"I think the more personalities that we have is great for the Premier League. Jose Mourinho is a personality," he added.

"He has won a lot of things over the world and that makes Chelsea a threat again.

"We do not fear anyone. We are the champions and people will be more fearful of us. I'd say it's between us, Chelsea and Manchester City for the title."