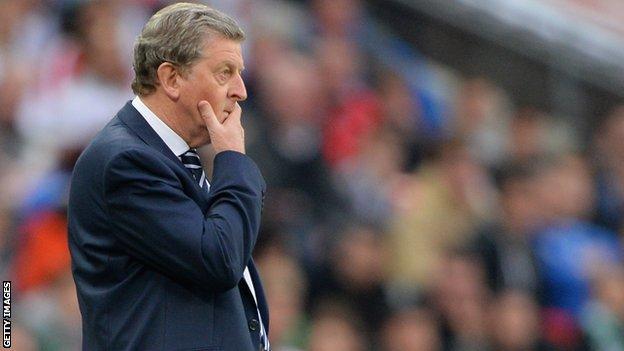 Former England captain Gary Lineker has accused the Premier League of having a "disregard for the best interests" of the national team.

The Match of the Day presenter believes the top-flight schedule does not help England manager Roy Hodgson.

In response to some fans indicating they do not care about the national team, he added: "I guess this justifies the Premier League's disregard for the best interests of England."

The games at Anfield and the Emirates could be played on Sunday, 1 September for live television coverage.

But former Tottenham striker Lineker, who scored 48 goals in 80 international matches, added: "Onus now on Sky and BT Sport to do the right thing and leave the games on Saturday. Time to put the nation's interests before their own."

Despite the scheduling, England players will have five days' preparation - one more than Fifa regulations require - for the game against Moldova at Wembley on 6 September. They then face Ukraine in Kiev on 10 September.

National newspapers reported Hodgson was angry that big domestic matches have been scheduled so close to crucial World Cup qualifiers.

The Football Association declined to comment, but it is understood no formal request was made regarding fixtures, although the issue was discussed at a meeting.

Hodgson could have as many as 20 members of his squad on duty at Anfield and the Emirates.

England are second in their World Cup qualifying group, two points behind leaders Montenegro, who have played a game more, while Ukraine are a point further back having played the same amount of games.

If they finish runners-up in the group, they face a qualifying play-off that will take place on 15 and 19 November - preceded by a Premier League game between Manchester United and Arsenal.