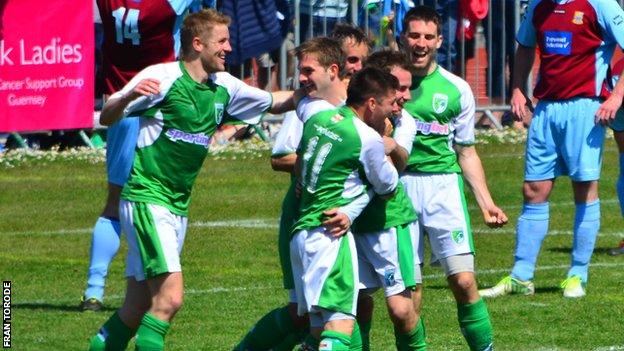 Guernsey FC could be forced to pull out of the FA Cup over restrictions imposed on them by the Football Association.

The FA says the club, one of a few from outside the English mainland to enter, must play any replays in England - even if they are the home side.

The club would also have to pay the travel expenses of visiting sides.

Those expenses, which come after the club has shared any gate receipts, mean Guernsey are considering whether they can afford to enter the competition.

The club, founded in 2011, also want to play in the FA Trophy, and director Nigel Braybrook told BBC South West Sport: "They're very prestigious competitions and the players have earned the right to take part.

"We feel they deserve the chance to show themselves on the national stage, but that could be taken away from us for non-football reasons."

Guernsey are used to paying for clubs to come over to the island to play them, having spent the past two seasons in the Combined Counties League,

They also made the semi-finals of the FA Vase,

As well as any home replays being played at a venue in England at Guernsey's expense, the club would also have to play any postponed home ties in England as well.

A Channel Island team has competed in an FA Cup before. Jersey's St Peter's ladies side played in the 2004 FA Women's Cup, losing 3-1 to Aldershot Town in the first qualifying round.

The FA has given Guernsey until Monday, 24 June to decide if they want to enter on those terms, and told BBC South West Sport that they would not comment until that time.

"They haven't given a reason, they've just set out these conditions," Braybrook said.

"I can only imagine their concern is that opposing clubs would have to travel over midweek, and at a lower level some of the players will have to work and they may have concerns about that.

"We would love to be in the competition but it's purely finance.

"Playing in the Ryman League this year will increase our costs considerably, with more matches, more overnight stays and longer journeys.

"If we play a game on the mainland, drew and then pay for the replay, it could potentially cost us £10,000 to play one round."

The club has launched a campaign to try to raise money in Guernsey to help fund their cup matches.