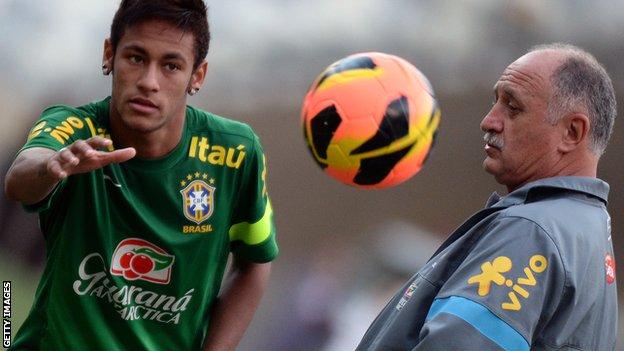 He is the man who has been handed the unenviable task of winning a home World Cup that the planet's greatest football nation dare not lose.

So it is no surprise that the sweat is still pouring from Luiz Felipe Scolari's brow as he sits down in front of Brazil's demanding press to discuss a third straight win, a performance against Mexico with flaws and two flashes of brilliance. There is not, however, a mood of celebration or triumphalism.

This is Scolari at his pragmatic best, managing expectation, speaking sense, keeping a nation's quiet optimism in check as he holds court deep in the bowels of Estadio Castelao.

"We did not play as well as we did against Japan," he says. "But we have won the game, technically we have played well and we are starting to get to a point where we don't have to fear losing to anyone. But we still have to improve to compete with the very best teams.

The second coming of Scolari

"We have taken a leap in a tactical sense but there is still something missing from our game. The players know this. We will get better, every day."

In Brazil he is Felipao - "Big Phil" - the man who turned Gremio and Palmeiras into continental champions, who won the World Cup for his homeland in 2002. He was reappointed last November to replace the sacked Mano Menezes, and the Brazilian media are in his thrall in Fortaleza as he discusses the brilliance of Neymar and the passion of the local people.

"We had difficulties at times tonight. But the spirit, the 'Brazilianess' we have seen here was incredible," says Scolari. "We leave here with so much support, what we saw here was incredible. The passion was amazing. The players said thank you. This team belongs to the people. It is the people."

The support for Neymar in Fortaleza was incredible. He is, after all, the new darling of Brazilian football. But the crowd also sang for Scolari; he is admired, respected, he has an aura that is hard to explain, a presence similar to the late Brian Clough, whom he counts among his greatest influences.

Scolari's 2002 World Cup victory was spearheaded by Ronaldo. Having spent three seasons overcoming an injury that appeared to have ended his career, Scolari invited the then-Inter Milan forward to join up with the Brazil squad early and finish his rehabilitation with them.

The results were staggering as a rejuvenated Ronaldo lit up the tournament with eight goals to take the Selecao to victory and earn a £50m move to Real Madrid.

Ronaldo believes nothing will get in Felipao's way next summer. "He has taken a lot of criticism in recent times, but the critics should be careful because he knows how to win. His team will be ready for the World Cup and they will be ready to win."

The people, too, know Scolari is a relentless, compulsive winner. They know he has not been restored to the Brazil job because his sides play beautiful football. Scolari is back for the 2014 World Cup for one reason, and one reason alone. Because he wins. And the people love him for it.

Neymar apart, Brazil offered little of their famed flair for much of the win over Mexico but, then again, this was a third straight clean sheet. As a player, Scolari was known as an uncompromising central defender, and as a manager those qualities have remained at the forefront of his approach.

The new Brazil number 10 may have lit up Estadio Castelao with two sublime moments of skill but for much of the contest this was a chance to reminisce at the success of Brazil's most recent World Cup-winning side. Functional, pragmatic, physical and forthright but with the brilliance of Ronaldo that won them the trophy.

Once again Brazil find themselves back in familiar territory. One year from a World Cup, Scolari in charge, a nation that is dreaming the biggest dream.

On social media, there were calls for Felipao to become president after the match. Luis Beckmann, a Brazilian from Rio, wrote: "Big Phil should be the president of Brazil. Only he knows how to solve the problems of the nation - all it takes is take to the field, win the game and the protests stop.

"Then everyone takes to the streets to celebrate. It is easy."

In English eyes, Scolari's achievements will always be tempered by that seven-month spell at Chelsea that ended with his sacking. Then followed a year at Bunyodkor, in Uzbekistan, and an ultimately unhappy return to Palmeiras, one of Brazil's most famous clubs, who were subsequently relegated.

And yet, with Brazil, he is a man reborn. He knows what to expect with the Selecao, he knows how to handle the pressure, knows what to say and how to say it.

He is funny, light-hearted and charming during his press conferences. He complains that the team have not yet learnt how to become a good samba band. Neymar turned up at the match holding a tambourine, Daniel Alves had a drum. It is Scolari's way of building team spirit and togetherness.

"My band is terrible," he said. "We need to get better. It is terrible."

He laughs and the people laugh with him. This is a man at ease, a man at home.

All of Brazil waits and watches. Scolari is taking the hopes of a nation on his shoulders but he wouldn't have it any other way. He is the man who has been handed the unenviable task of winning a World Cup that the planet's greatest football nation dare not lose.