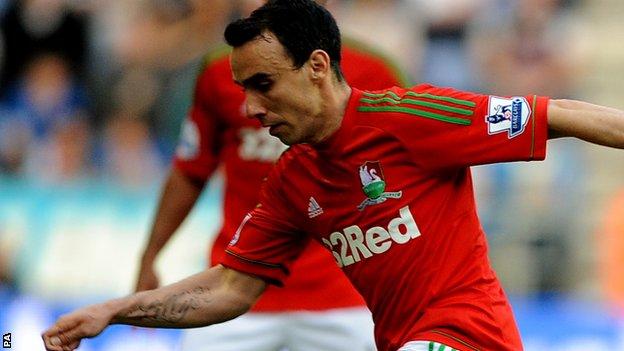 Leon Britton hopes the uncertainty over Michael Laudrup's future as Swansea City manager is finally at an end.

Doubts over Laudrup's future arose when the club severed ties with his agent Bayram Tutumlu, following a dispute over transfer policy.

But the Dane said he intends to stay at Swansea City, despite the apparent row.

"From a player's point of view we hope he stays and I'm sure all of the supporters do as well," said midfielder Britton.

Laudrup was only appointed Swansea manager in June 2012 following the departure of Brendan Rodgers to Liverpool.

In his first season in charge the former Barcelona and Real Madrid player led the club to a Capital One Cup win at Wembley and Europa League qualification.

"I think as players and everyone involved with the football club we were expecting a quiet summer with maybe a few signings and that would be it," Britton added.

"There's been so much speculation about the manager this summer.

It's a great start to the Premier League season, for us to be the first team to face Manchester United and David Moyes,

"But the manager's come out on a few occasions and said he's going to be here next season.

"Hopefully that gets put to bed and the manager will come back on 2 July and we can knuckle down and train hard preparing for the new season."

Swansea will begin their third season in the Premier League at home to champions Manchester United, now managed by David Moyes following the retirement of Sir Alex Ferguson.

"It's a great start to the Premier League season, for us to be the first team to face Manchester United and David Moyes," Britton said.

"I think every football fan probably up and down the country was looking at who Man Utd [would] get because everyone is so intrigued to see how they cope without Sir Alex Ferguson.

"It will still be the same set of players when you cross that white line and obviously when you come up against Man United it's very tough, regardless of who the manager is."

Britton is also relishing the south Wales derbies against newly-promoted Cardiff City, who will be playing in the Premier League for the first time next season.

The Swans travel to Cardiff on the weekend of 2 November before hosting the Bluebirds at the Liberty Stadium on 8 February.

"Everyone involved in both football clubs, that's probably the first one we looked for," Britton said.

"It's been a couple of years without the derby games but we've seen over the last five or six years when we've played each other they've been great occasions.

"With it being in the Premier League this season it adds a little bit more spice to it."