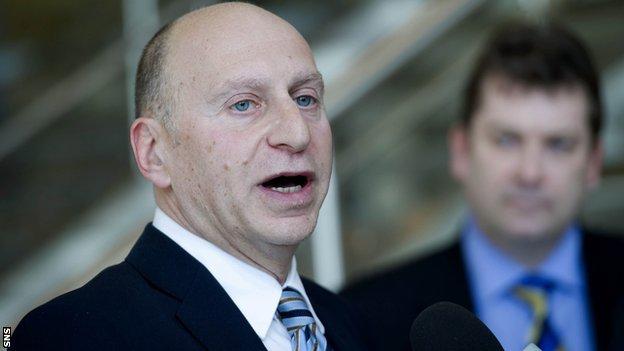 Dunfermline's administrator BDO will proceed with the offer of a company voluntary arrangement following a meeting with the Fife club's creditors.

One of the offers is from fans group Pars United, while the other remains undisclosed.

No decision has yet been made over which party will formally propose a CVA on 12 July.

On that day, creditors will decide whether to accept or reject a pence in the pound deal for what they are owed.

To be accepted, a CVA must have the support of creditors due 75% of the total debt.

The Pars have been in administration since March, with debts of £8.5m owed to majority shareholder Gavin Masterton and other companies.

Pars United are due to meet with BDO's Bryan Jackson on Monday for further talks about their bid.

Bob Garmory, of Pars United, told BBC Scotland: "We're confident we have offered a deliverable bid, but the administrator wants to talk to us about some of the conditions attached to our bid.''

In a statement, the fans group said they to hope emerge as the the preferred bidder for the club and the ground "shortly".

"Our aim is simple," said Garmory. "It is to restore the club we love, and put it onto a sound footing for the future."