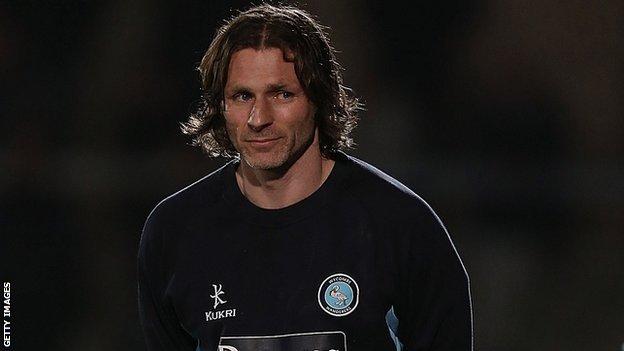 Wycombe Wanderers boss Gareth Ainsworth has said he is working with a reduced budget but expects to make three or four more signings.

The Chairboys' only close season arrival so far has been

"I'm confident we can get some good signings through the door," Ainsworth told BBC Three Counties Radio.

"Those that watched us last year know that with a young team we try and get the best out of these players."

Ainsworth, who will be entering his first full season as manager of the League Two side, is continuing talks with out-of-contract quartet Danny Foster, Marvin McCoy, Leon Johnson and Joel Grant.

"The best players last year, I'm trying to keep hold of those," he said.

"We have got contract offers out on people.

"We're competing against bigger teams, we've had a slight budget cut and we'll see what happens.

"We'd like to add in the region of three or four if we can.

"There's parameters on that of how much we pay players. If we get players cheaper we can sign more. If we sign big names it takes a chunk of the budget up. But I've got a lot of bases covered."