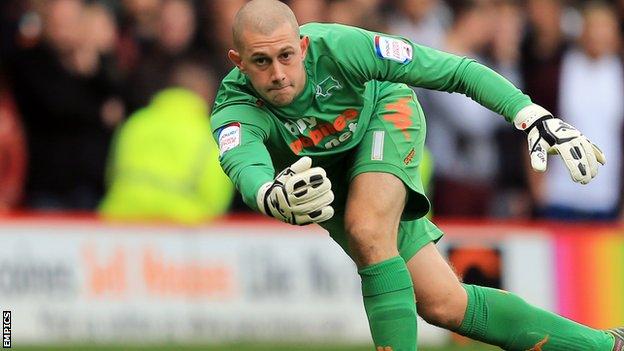 Bristol City have agreed a fee with Championship side Derby County to sign goalkeeper Frank Fielding.

Fielding has a year left to run on his deal at Derby but is set to leave after losing his place in the team.

City, meanwhile, are without a keeper after Tom Heaton joined the Clarets and Dean Gerken was released.

Fielding, a former England under-21 international, started his career at Blackburn but spent much of his time out on loan at Wycombe, Leeds, Rochdale and Northampton.

After a three-month spell with Derby, he secured a permanent move to Pride Park in June 2011.

Fielding was first-choice keeper until he picked up a groin injury in October and was replaced by Legzdins.

He has made 80 appearances for the Rams.