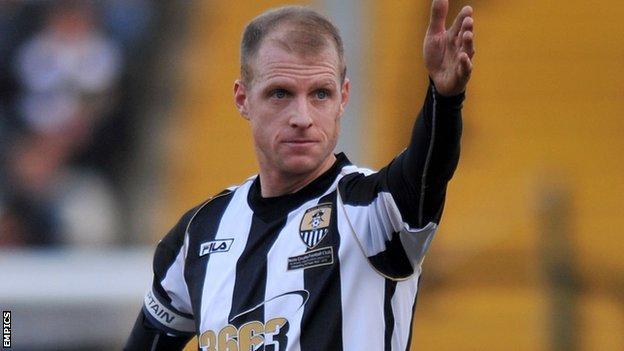 Notts County's longest-serving player Neal Bishop is to leave after having his deal cancelled by mutual consent.

The 31-year-old midfielder joined in 2009 and has played nearly 200 games but signed release forms on Wednesday and said it was the "right time" to go.

"It's an emotional day," said Bishop, who is set to join a Championship club.

"This club has been a major part of my life for four years and I wouldn't change a thing about my time here. It's been the best part of my career."

The former Magpies captain, who had one year left to run on his contract, is the third high-profile player to leave the club already this summer.

Midfielders Alan Judge and Jeff Hughes have already departed and defender Alan Sheehan is also expected to be moving on during the close season.

Bishop added: "The club are heading in a different direction and there are a number of changes this summer and it just seemed the right time.

"I've had meetings with the manager [Chris Kiwomya] and the board and I've given my reasons and I'm really grateful to Jim Rodwell and the Trews who have been very understanding and helped me.

"It's been fantastic. From the rollercoaster of the first season, the cup runs, captaining the club at Juventus and leading the lads out, representing the club was a massive honour. It's probably my proudest moment in my life.

"The fans have been absolutely fantastic with me. I'd like to wish them all the best and thank them. I can't speak highly enough of them."