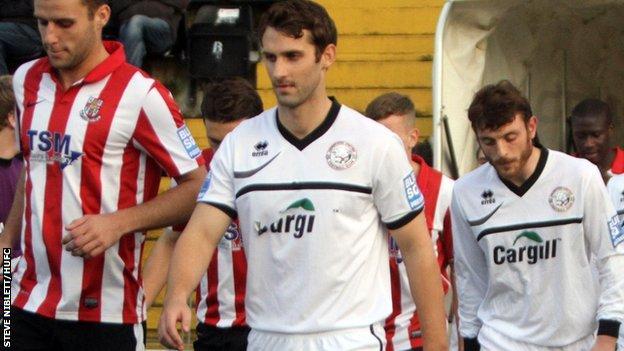 Hereford captain Luke Graham says he will be scouting for players when he plays for Great Britain at the World University Games in Russia this summer.

Staffordshire University student Graham believes that some of the squad could make it at Conference Premier level.

"I'm going to have to learn about my team-mates quickly," the 27-year-old told BBC Hereford & Worcester.

The opposition will range from top-level players who are playing international football at under-21 level, all the way down to part-time players so it's going to be an unbelievable experience

"There might be a few gems out there who might be able to step up to Hereford's level."

Defender Graham, who recently signed a new one-year-deal at Edgar Street, balances his football career with a part-time course funded by the Professional Footballers' Association.

And the former Northampton and Kettering man added that he was determined to take up his place in the squad as he feels he will be a better player for the experience.

"I told everyone including the gaffer (Hereford boss Martin Foyle) that I wanted to go as I just feel I am going to learn so much out there," he said.

"The opposition will range from top-level players who are playing international football at under-21 level, all the way down to part-time players, so it's going to be an unbelievable experience."

Being called up meant that while the majority of players have been on their summer break, Graham has been working on his fitness levels ahead of the tournament.

However, he believes one of the benefits will be that is back at pre-season training ready to go for the new season.

"We are due to arrive back in England on 18 July so I'll only miss a couple of weeks of Hereford's pre-season which will be mostly running, which I'm delighted about, but I will come back match fit," he added.