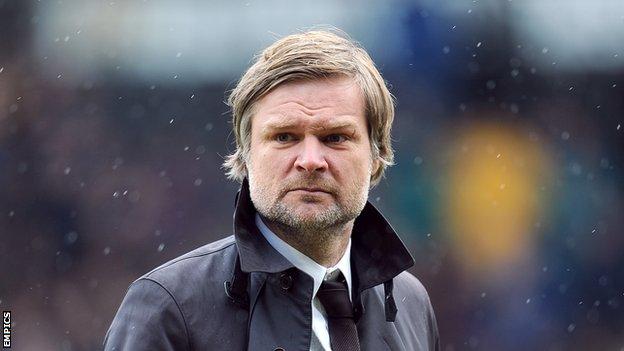 Coventry City boss Steven Pressley says he will look to sign seven players when the club comes out of administration.

The Sky Blues should soon be able to bring in new players after the club's administrator Paul Appleton accepted a bid from Otium Entertainment Group.

"But we're certainly looking to recruit in the region of seven players."

The bid made by London-based company Otium - registered to ex-Sky Blues directors Ken Dulieu, Onye Igwe and Leonard Brody - was one of four received by the League One club's administrator Appleton.

Appleton said he had accepted the Otium bid because it was the highest, and they are now looking to finalise the deal.

Meanwhile, Coventry are still yet to confirm where they will be playing their home matches next season as their long-running rent row with the Ricoh Arena landlords, Arena Coventry Limited, continues.

Sky Blues chief executive Tim Fisher revealed the club are in talks with three other Midlands clubs over a groundshare for the forthcoming campaign, and Pressley admitted that it was not a situation he enjoys being involved in.

"It's far from an ideal situation. It's far from what we all want," he said. "We all want Coventry City playing in Coventry, but it's about finding the correct solution, and that's the important thing.

"And hopefully in the days and weeks ahead we can do that."