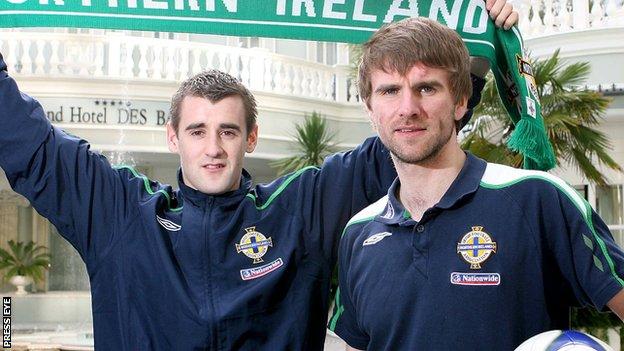 Internationals Paddy McCourt, Niall McGinn and James McClean are among the former Derry City players lined up for Kevin Deery's testimonial on Saturday.

Deery is the Candystripes skipper and is rated by many as one of the best midfielders in the Premier Division.

Last year he turned down a move to Sligo and helped Derry win the FAI Cup.

It is billed as the current Derry City side against an All Star team of former club players and kicks-off at 17:00 BST.

"I thought I would try something different and get some former players back," said 28-year-old Deery.

"Although they are plying their trade with much bigger clubs, I think they miss this place and the craic with the boys.

"It is going to be a light-hearted affair, there will not be any fierce tackles flying in.

"It is more of an occasion and I am looking forward to them being out on this pitch again."

Deery is in the final year of his current City deal but hopes to extend that.

"I have had a few injury setbacks down the years. Hopefully, I will do well this year and maybe stay for a few more.

"This testimonial is definitely not marking the end of my career."

The Premier Division is currently on its mid-season break, with Derry City in second place, three points behind title holders Sligo Rovers but with a game in hand.