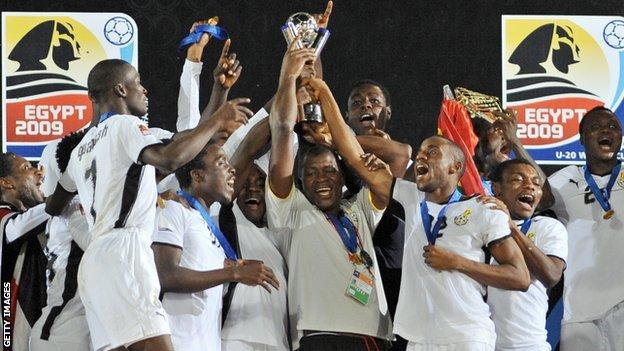 Egypt head to the Under-20 World Cup as the African champions after victory at the continental event in Algeria in March.

They are joined at the finals in Turkey, which kick-off on 21 June, by runners-up Ghana and losing semi-finalists Nigeria and Mali.

Ghana's Black Satellites are the only African nation to have lifted the Under-20 World Cup, when they won in Egypt in 2009.

The rise of the African champions at this level should be no surprise as they have been coached by some well-known names in Egypt - from former captain Hany Ramzy to his 1990 World Cup teammate Rabie Yassin.

Egypt at the U-20 World Cup

The squad heading to Turkey is drawn from the top teams in Egyptian football with Ahmed 'Koke' Hassan, who plays in Portugal for Rio Ave, the only foreign-based player.

Unfortunately, exciting youngster Alexander Jakobsen from Dutch side PSV Eindhoven, who played in Algeria, is not in the squad.

The Young Pharaohs have prepared with several friendlies - including losses to Brazil (1-0), Montenegro (3-1) as well as wins over New Zealand (2-1) and Kosovo (8-0).

Yassin has also been doing his homework and leaving nothing to chance.

"Iraq has players with senior team experience," he warns.

"It will not be easy in a tough group with strong teams like England and Chile."

Ghana are back at the Under-20 World Cup four years after their remarkable triumph in Egypt at the expense of Brazil.

After that penalty win that gave the Black Satellites Africa's first title at this level, Ghana has struggled and failed to qualify for the 2011 edition.

All that has changed since the return of Sellas Tetteh, the man who masterminded that famous victory in Cairo four years ago.

Tetteh led Ghana to the runners-up spot at the African under-20 event and heads to Turkey determined to do as well as they did four years ago.

"It helps that I have been here before and know exactly what is expected of us.

Ghana at the U-20 World cup

"We are in a tough group with Spain, France and USA but I am sure they also understand we will be good competition too."

While the Satellites will be desperate to win the tournament it is also a chance for the next generation of youngsters to make their mark.

Over the years stars like Samuel Osei Kufour, Michael Essien, Sulley Muntari, Derek Boateng, John Mensah and Dede Ayew have all played at the tournament.

Tetteh is convinced he has future stars in his current set up too. including Inter Milan's Alfred Duncan, Baba Abdul Rahman a left back from Greuther Furth in Germany and Richmond Boakye Yiadom, the Juventus striker who spent last season on loan at Sassulo.

Rahman and Yiadom already have full international caps for Ghana.

The coach's task will be to ensure these Europe-based players gel well with his team of determined youngsters who ply their trade in Ghana.

Mali qualified for their fifth Under-20 World Cup as one of the losing semi-finalists at the African championship in Algeria.

While Mali will not be among the favourites in Turkey this crop of players will be all too aware of the expectations back home.

Like many nations this competition has been produced some big names for Mali, including former Barcelona midfielder Seydou Keita as well as Mahamdaou Bagayoko and Mahamadou Dissa.

Mali's best showing at the Under-20 World Cup was third place in 1999 in Nigeria.

Coach Moussa Keita, a former Mali international defender, has called on five foreign-based players to beef up the squad.

However has dropped three overseas-based stars for the trip to Turkey - goalkeeper Ali Yiringa from Marseille, Boubacar Diarra of Torino and Famoussa Kone of Bastia.

Despite being nearly six feet tall, Guingamp striker Tiecoro Keita is nicknamed the Malian Messi and he caught the eye of many in Algeria.

He was named as a substitute in Caf's team of the tournament in Algeria, while there was a place in the starting eleven for Boubacar Diarra the defender from DR Congo giants TP Mazembe.

Keita's preparations have not been ideal with the team unable to play any high-quality friendly matches since returning from Algeria.

"We have two friendly matches in Turkey," Keita disclosed to Malian newspaper l'Independant.

"It will give us an idea of how prepared we are for the tournament. We can build on that to have a good campaign."

Mali will open their campaign against Paraguay before taking on Greece and Mexico, respectively.

After twice losing in the final of the Under-20 World Cup in 1989 and 2005, Nigeria are desperate to finally land the elusive trophy in Turkey.

Nigeria at the U-20 World Cup

Despite global successes at under-17 and Olympic (under-23) the Flying Eagles have never been crowned under-20 world champions even though they have appeared in nine previous finals tournaments.

The side has already come in for criticism despite their third place finish at the African Under-20 Championship in Algeria.

In early June the West Africans finished in eighth place at the ten-nation Toulon tournament in France, which has some fans describe them as the country's worst under-20 side ever seen.

Coach John Obuh, who has been at the centre of the storm since the Flying Eagles were convincingly beaten by champions Egypt in the semi-final in Algeria, is however focusing on the task ahead.

"We believe we have a squad good enough to make Nigerians proud." Obuh told BBC Sport.

Obuh will be hoping for a star performance from highly-rated youngster Aminu Umar, who scored four goals to emerge top scorer at the African championships in Algeria.

Knocked out by France in the quarter-final of the 2011 edition in Colombia, Nigeria are in Group B of the World Cup in Turkey, along with Cuba, Korea Republic and Portugal.