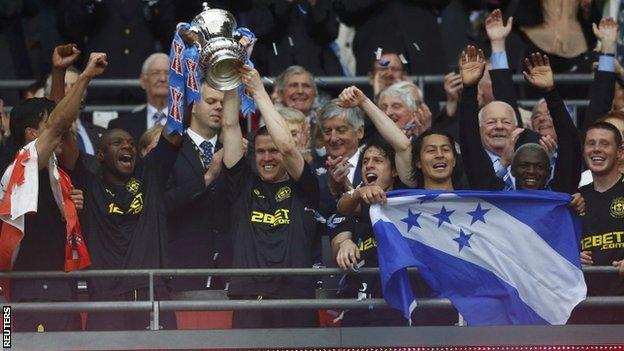 The FA Cup final will return to the end of the domestic season for the first time since 2010 from next year.

Premier League games were played on the same weekend as the last three finals.

But the 2014 final will take place on 17 May, the weekend after the final round of league games.

FA general secretary Alex Horne said: "We're aware fans and media have been calling for the FA Cup final to have a day to itself and we're delighted that this is going to happen for 2014."

In 2011, Manchester City beat Stoke in the final on the same day as Manchester United won the Premier League.

Last season, Wigan won the FA Cup with a 1-0 win over City, only to suffer relegation three days later.

Horne claimed the fact that Wembley has hosted two of the last three Champions League finals had impacted on scheduling.

He added: "There have been various reasons, not least the two Champions League finals at Wembley Stadium, which have been fantastic occasions and required huge resources and a massive build up time behind the scenes."