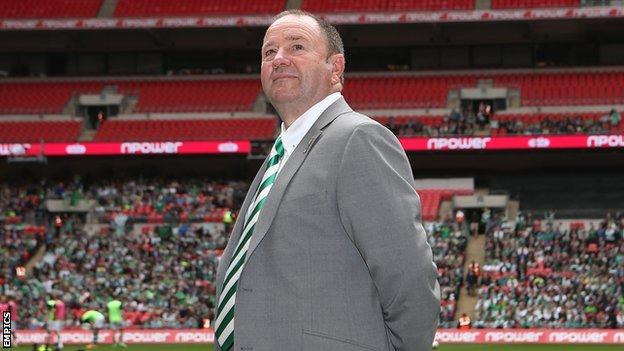 Manager Gary Johnson says Yeovil Town will "embrace" being a small club in the Championship next season.

The League One play-off final winners averaged a crowd of 4,071 last season and it is thought that Johnson worked with a budget of under £1m.

"We're definitely going in as the underdogs, but we said that in League One let alone the Championship," the 57-year-old told BBC Somerset.

"We've got to embrace it as a club and we've got to be excited about it."

Yeovil, who finished fourth in the table last season, secured a place in the second tier for the first time in their history with a 2-1 win over Brentford in the play-off final at Wembley.

The Glovers start their Championship campaign on 3 August away at Millwall before welcoming Birmingham City to Huish Park in their first home game.

"In the first couple of months the fans will see Birmingham, Derby, Reading and QPR," continued Johnson.

"To get them at Huish Park is unbelievable. If we get full houses it will be like big FA Cup games every week, and that's how we've got to treat it.

"There are players out there that will be on a weekly wage which is the same as our weekly wage for everybody so it will be a good test."

Johnson, who signed a new two-year deal earlier this month, confirmed he would be adding "four or five" new players to his squad over the summer, but would remain frugal with his playing budget.

"You do need a bigger squad but the bigger the squad, the more the money is diluted between individuals. I've got to try and balance it if I can," he added.

"I have said don't expect any household names. We'll get in those players you've got to take a little gamble on, because of our financial situation.

"But they'll all have something which we can be excited about and that's what I'm pleased about."