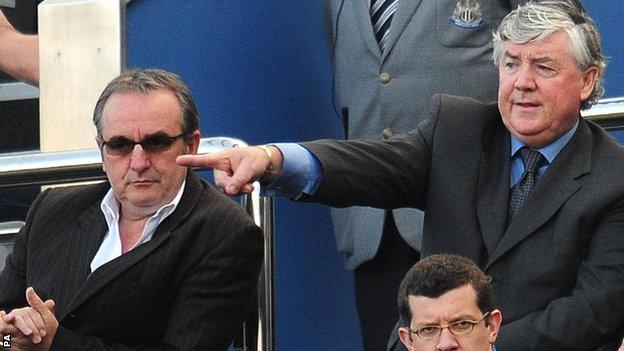 Newcastle United managing director Derek Llambias has resigned, the day after Joe Kinnear's return to the club as director of football.

Kinnear, 66, has taken charge of all football-related matters at the club.

In a statement on Tuesday, Llambias said he was "pleased to welcome Joe back".

After his resignation he said: "I have had an incredible journey during my five years at the club, including some challenging times."

"When you come in as director of football it is expected that you go softly softly but it's almost been the executive equivalent of a two-footed challenge.

Meanwhile Toon manager Alan Pardew, who will now report directly to Kinnear, has given a brief comment to the Newcastle Chronicle on his future. He said: "I am staying to take the club up the league."

Llambias, who had worked closely with owner Mike Ashley since he took over the club in 2007, did not give any reasons for his decision to leave St James' Park.

"I will reflect with great fondness on my time in the north east and, in me, Newcastle United have a lifelong supporter," he said.

"I want to thank the staff for their hard work, our fans for their support of the club, and wish them all well for the future."

In an interview with talkSPORT on Sunday, Kinnear said Llambias "was the director of football, he resigned and the role became available". During the interview, Kinnear mispronounced a number of names, including describing Llambias as "Lambayzee".

The former Wimbledon boss managed Newcastle during the 2008-09 season, but stepped down after suffering a heart attack. He has been brought back by Ashley to run the football side of the club, signing a three-year contract.