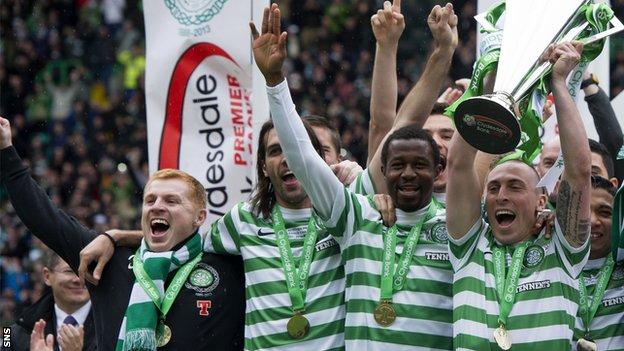 Scottish Premier League champions Celtic will kick off next season at home to Ross County on 3 August.

Dundee United travel to Firhill in what will be Partick Thistle's first top-flight match in nine years.

Celtic's second match will be at Aberdeen two weeks' later, with the scheduled home match against St Mirren on 10 August set to be postponed to allow Neil Lennon's men to play Liverpool in a friendly in Dublin.

Hearts are in administration and will begin the campaign with a deduction of 15 points.

"There is a lot of time still to pass before the first game. Hopefully their financial problems will be sorted out by then," he said.

"Will their situation play any part in our thoughts ahead of the game? No, no, no.

"I can only focus on my own team and that's what I'll try to do. There might be a lot of press coverage on Hearts between now but I can only prepare St Johnstone for the game."

The second weekend of the new term throws up an Edinburgh derby, with Hibernian visiting Tynecastle, while Highland rivals Ross County and Inverness first clash at Victoria Park on 26 October.

Fans face a series of long journeys on Boxing Day, with Motherwell going to Aberdeen, Partick Thistle hosting Inverness and Hibs setting out for Ross County.