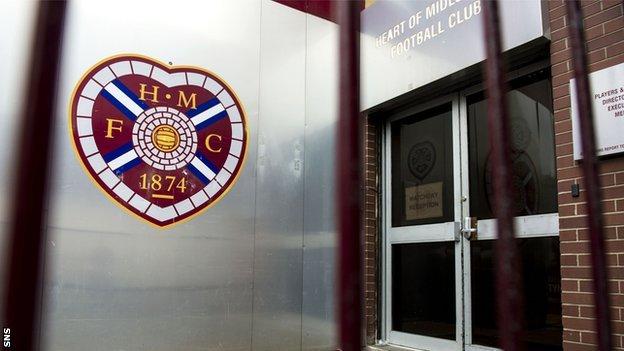 The Hearts board rejected an offer from a prospective buyer on Monday that would have allowed the club to avoid going into administration.

A Scandinavian consortium offered to pay the club £500,000 immediately in return for a share of any future transfer income from up to 12 players.

The offer was conditional on the club not being placed into administration.

On Thursday it emerged Hearts needed £500,000 cash to pay salaries and meet tax demands over the summer.

The club estimated that this amount would see it through to the start of next season when it could look forward to match-day revenue, money from sponsors and payments from the new Scottish Professional Football League.

BBC Scotland has learned that the talks took place early on Monday morning,

when the club's parent company, UBIG, files papers at the Court of Session on Edinburgh for accountancy firm BDO to be named as administrators.

Hearts owe Lithuanian investment company UBIG £10m, Ukio Bankas, which has been declared bankrupt, £15m, and are facing a number of tax bills.