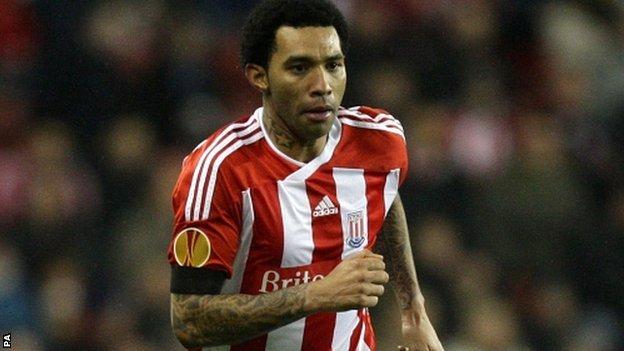 Stoke City have opted to hand winger Jermaine Pennant a one-year deal, 12 days after deciding to release him.

The 30-year-old winger has been given a fresh start under new boss Mark Hughes, having been one of seven players discarded at the end of last season.

"I've admired Jermaine from afar and there is no question about his ability," said Hughes.

"I am looking to introduce more creativity and attacking options to the side, qualities Jermaine can offer us."

Hughes added: "I had a very positive meeting with him and it's now up to him to show everyone what he is capable of doing."

Pennant joined Stoke in 2010 on a loan deal from Spanish side Real Zaragoza before making his switch permanent later in the same year.

He made 77 appearances for the Potters and played his part in the team that reached their first FA Cup final in 2011.

However, he slipped out of favour last season, making only two appearances, and had a three-month loan spell in the Championship with Wolves.

City chief executive Tony Scholes added: "We have been impressed with Jermaine's determination to prove any doubters wrong.

"He clearly had a difficult time last season, but the Stoke fans love him and he loves them. We believe that at 30 years of age, he still has a lot to offer.

"The one-year contract, which has the option to be extended beyond that, has been structured in a way which should ensure he focuses on his performances on the field."