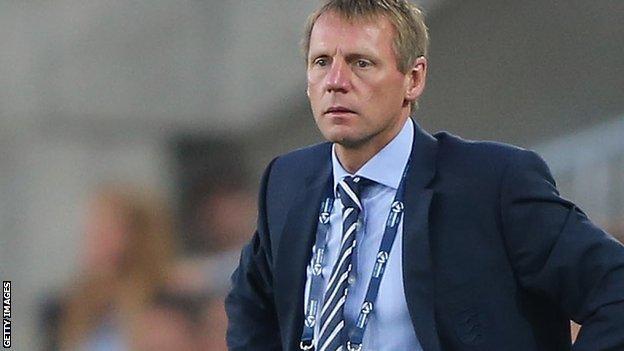 England Under-21 coach Stuart Pearce will not be offered a new contract by the Football Association when his deal expires at the end of June.

Pearce, 51, has been in charge of the Under-21s for the last six years.

The former Manchester City boss and his players have been criticised following England's early exit at the European Under-21 Championship this month.

"I'd like to thank Stuart Pearce for his hard work," said departing FA chairman David Bernstein.

"Nobody can doubt his commitment to the job throughout his time as Under-21 coach.

"He has done extremely well in qualifying for finals tournaments, but after the disappointment of the past two tournaments we believe it is time to change coach.

"On behalf of everyone at the FA, I'd like to wish Stuart well for the future."

The FA said no decision has been made on Pearce's successor.

Former Middlesbrough manager Gareth Southgate - the bookmakers' favourite - and ex-England boss Glenn Hoddle have been linked with the post.

"It is important the organisation now considers the best approach for the role of Under-21 coach and how this works best within the overall England structure before making any new appointment," added Bernstein.

Pearce, who was also coach of Great Britain at the 2012 London Olympics, led England to four European Under-21 Championships.

They reached the semi-finals in the Netherlands in 2007 and lost in the final to Germany two years later in Sweden.

Expectations were high when the squad headed out to Israel for this year's tournament, as they had been unbeaten since November 2011 and won their last nine games without conceding a goal.

The general consensus is Gareth Southgate, the former head of elite development at the FA, is the favourite to take over. I think he would enjoy the opportunity of getting back into management.

I know from speaking to him in the past it is something he has looked at possibly doing. Whether this role is one that appeals to him, only he would know.

But they were eliminated in the group stage, for the second tournament in a row, after losing all three games to Italy,Norway and Israel.

Pearce placed responsibility for his side's early exit on the players, saying: "The players haven't delivered. I'm really disappointed with my team."

Goalkeeper Jack Butland was among members of the team saying they wanted the ex-Nottingham Forest defender to stay on as coach, commenting last week: "It is us that have not performed".

Pearce was also unhappy he was unable to take several players to the tournament because of their senior team commitments, but had indicated he was keen to carry on in the role.

Former Tottenham manager David Pleat believes that more should be done to ensure the Under-21 side has its best players more readily available.

"There has been reluctance from some managers to make their young players available. The whole set-up needs looking at," he told BBC Sport.

"Unless the FA gets tougher with leading clubs and we regard the nation's results as more important than the clubs, then we are going to continue to have problems."

Jack Rodwell, Kyle Walker, Phil Jones, Alex Oxlade-Chamberlain, Jack Wilshere and Danny Welbeck were all called up to the senior squad recently for friendlies against the Republic of Ireland and Brazil.

Luke Shaw, Callum McManaman and Raheem Sterling were all unavailable because of injury while Andros Townsend had already voluntarily withdrawn from the squad when he was fined and given a suspension by the FA for breaching betting regulations.