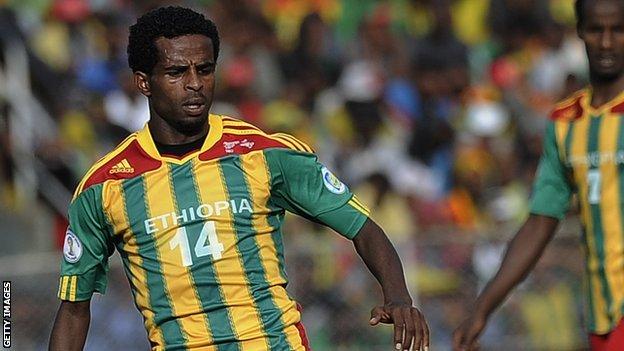 The president of the Ethiopia Football Federation, Sahilu Gebremariam, has admitted his side used a suspended player in a 2014 World Cup qualifier.

If Ethiopia lose the three points from their win over Botswana on 8 June it means South Africa and Botswana can still progress.

Gebremariam has told BBC Sport that Minyahil Teshome Beyene should have missed the match having picked up two yellow cards in previous qualifiers.

"We're not going to appeal, it's a management blunder," he said.

We made a mistake, but we are leading the group and we need to concentrate on the future

"We have accepted the Fifa discipline issue."

Fifa announced on Sunday they would be investigating whether Ethiopia used an ineligible player.

It means that Ethiopia are almost certain to lose the three points from the win over Botswana, who will be awarded a 3-0 victory.

Should that happen, it would hand a lifeline back to 2010 World Cup hosts South Africa as they would only trail group leaders Ethiopia by two points going into the final round of matches in September.

Botswana would also have an outside chance of finishing top on goal difference.

To do that they would have win in South Africa and hope Ethiopia lost away to Central African Republic in the final group matches.

Only the 10 group winners from the second round advance to contest in the final two-legged play-offs to decide the five nations who will qualify for Brazil 2014.

Gebremariam remains confident that his side can still reach the play-offs.

"We made a mistake, but we are leading the group and we need to concentrate on the future," he said.

"We're very much motivated and we know we can qualify."

He refused to blame any individual for the problem.

"The point is that collectively this is a federation problem," he insisted.