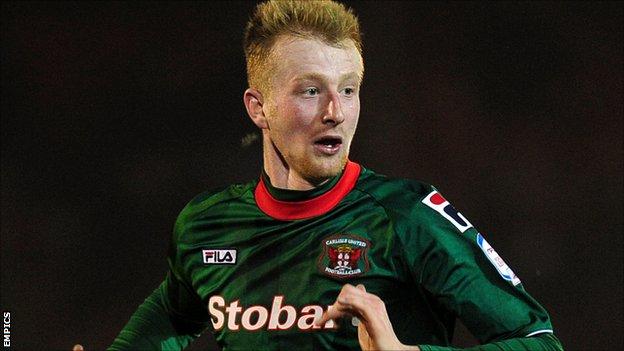 Carlisle United manager Greg Abbott is reluctant to burden striker Mark Beck with the pressure of leading the attack at Brunton Park.

Abbott is still waiting for Lee Miller to commit to United for next season, although talks are expected.

"I don't think you can say he's ready to lead the line for 46 games," Abbott told BBC Radio Cumbria.

"At the age of 19 you wouldn't expect that. He needs to another season to get streetwise, and needs to be able to go in and out of the team.

"Having said that he might end up playing every game, but I would think he'll need a helping hand at the top end of the pitch."

After an impressive first full season in the Carlisle first-team, with six goals in 31 games, Sunderland-born Beck was called up to the Scotland under-19 squad and scored on his debut against Sweden.

He was then retained for the Elite round of the European Under-19 Championship.

"The different levels they go at and working with different coaches, I think it's fantastic for him.

"All the experience he's getting in at the moment is invaluable," Abbott added.

"We're hopeful Mark can come through and step on again next year, he's got a real fighting chance."