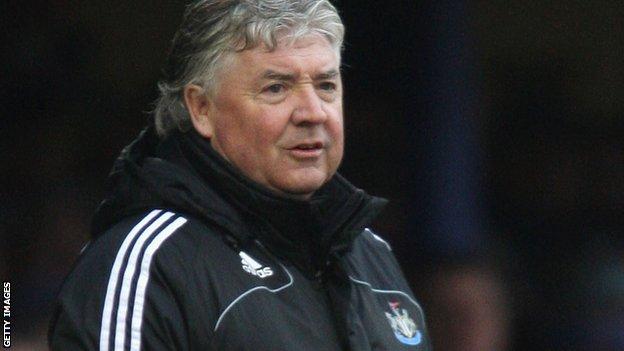 Newcastle have confirmed the appointment of Joe Kinnear as director of football on a three-year deal.

The club have made their announcement after the former Magpies manager had revealed on Sunday that he would be taking up the role.

The 66-year-old will report to the club's board as the senior executive in charge of all football-related matters at the St James' Park outfit.

"The board are pleased to welcome Joe back to the club," managing director Derek Llambias told the club's website.

"Joe has many years of experience working within the game, and this experience will be of great benefit to the club in achieving our objectives over the coming seasons."

Newcastle have appointed a controversial director of football before when Leeds manager Dennis Wise took the position in January 2008, shortly after Mike Ashley bought the club.

Manager Kevin Keegan said at the time: "I am all for the changes and I approve of them."

However, Keegan resigned in September saying: "It's my opinion that a manager must have the right to manage and that clubs should not impose upon any manager any player that he does not want."

Joe Kinnear worked under Wise but the former Chelsea and England midfielder left the club in April 2009 with a statement on the club website posted less than an hour before Alan Shearer was confirmed as temporary boss.

Newcastle's chief scout Graham Carr will also report to Kinnear in a reshuffle at the club following their struggles last season when they finished fifth from bottom of the Premier League.

The Magpies finished fifth in 2011-2012 but pressure mounted on Pardew when his side finished just five points above the relegation zone in May.

Kinnear was Newcastle manager between September 2008 and February 2009 before his stint came to an end after he was taken ill with heart problems.

He was previously manager of Wimbledon between 1992 and 1999 and was awarded the League Managers' Association manager of the year award after guiding the Dons to sixth.

The former Tottenham player was in charge of Nottingham Forest for 10 months in February 2004 but has not managed since his brief spell in charge at St James' Park.

His return has generated plenty of controversy, with the Tyneside outfit initially failing to confirm the appointment.

Kinnear had no such qualms about publicising his new position, which he stated would involve recruiting players but no involvement in team selection or tactics.

He also gave an interview to sports radio station talkSPORT in which he said he had "more intelligence" than the critics who have questioned his appointment.

At the end of the interview, he said: "I don't know what angle they've [critics] got, if they want to sit down and argue with me.

"Some are talking out of their backsides, a load of tosh.

"I'm not accepting it, as simple as that. I have certainly got more intelligence than them, that's for sure."