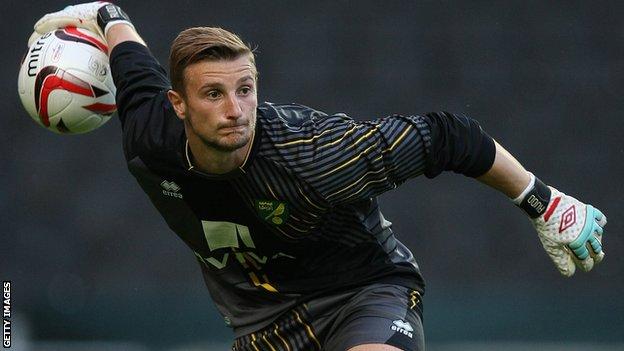 Declan Rudd has returned to Preston on a season-long loan, after signing a new one-year deal at Norwich.

The 22-year-old, whose new contract runs until 2015, moved to Deepdale in January and made 14 appearances.

Rudd has just returned from Israel where he was part of England's Under-21 squad at the European Championships.

"I've been at the club since I was eight years old so to get another contract extension is brilliant, I'm really pleased with it," said Rudd.

Rudd has appeared just 18 times for the Canaries, with first-team opportunities limited because of the form of England international John Ruddy and Mark Bunn.

"It went really well at Preston last year, I think we only lost two games when I was there and we were unbeaten at home," Rudd added.

"I really enjoyed it and that's one of the main reasons why I wanted to get the contract sorted and get back there again.

"Working here with Dave Watson is great, given the stature of coach that he is, but you need to play football. As a young goalkeeper that's the most important thing. I'm really looking forward to the season starting."