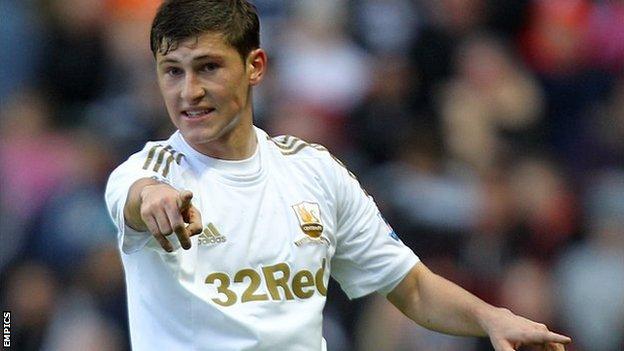 Swansea defender Ben Davies says he and his team-mates are in the dark about manager Michael Laudrup's future but are desperate for him to stay.

There has been continued speculation about Laudrup's position this summer.

Davies told BBC Sport: "I try to ignore it as much as I can, although it is pretty hard when it is in every paper.

"As players, we will not know until something does come out but everybody loves playing under Michael, and you saw how well we did last season."

Swansea finished ninth in the Premier League and won the Capital One Cup in Laudrup's first year in charge.

The Dane handed Swans youth product Davies, 20, his senior debut at the start of last season when Neil Taylor was injured, and the left-back went on to play 44 games and win the club's young player of the year award as well as earn five Wales caps.

Davies is grateful for the part his manager played in his meteoric progress, explaining: "He is quite a quiet man and he does not say a lot to all the players but, as soon as he took charge, he was always telling me that I was part of his plans for the season.

"I didn't expect to be told that and it threw me a bit, but for someone as high profile and knowledgeable as him to put his confidence in me was a big boost."

Laudrup, who signed a contract extension with Swansea in March, has been linked with clubs all over Europe in recent weeks.

The 49-year-old has insisted he is staying at the Liberty Stadium, despite a dispute over transfer funds this summer before the club severed ties with his agent Bayram Tutumlu following a fall-out over transfer policy.

Davies hopes the former Juventus, Barcelona and Real Madrid midfielder will be still be in charge when the players return for pre-season training at the start of July.

"He is one of those people who will show you how it is done as opposed to tell you," Davies added. "When you are out on the training pitch with him, every day he is probably showing half the team how things are done - it is easy to learn from him out there.

"When you have got someone like that who is your manager, you always hope to do your best to show him that maybe you could step up to his level one day. He inspires you to want to keep getting better and better."