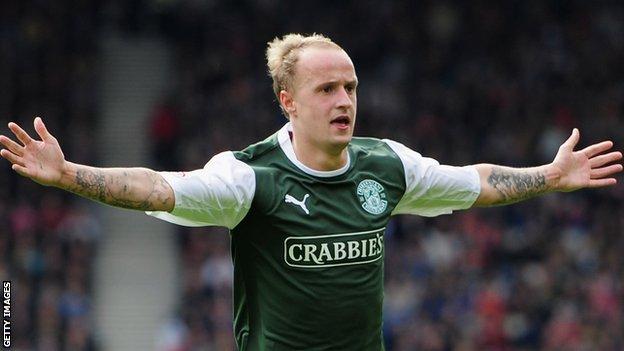 Wolves have rejected an offer from Hibernian to sign striker Leigh Griffiths on a permanent basis.

The 22-year-old Scotland international scored 28 times on loan at Hibs last season and was named the PFA Scotland young player of the year.

But Wolves, who recently took up a one-year option on Griffiths' contract, are not interested in selling the forward.

"There is no offer which can be made at this time that will change our minds," Wolves chief executive Jez Moxey said.

Reluctantly, we have to conclude that there is nothing further that can be done at this time to prise the player away from Wolves

"Our new head coach Kenny Jackett is looking forward to working with Leigh, who has been such a sensation in Scottish football during his time with Hibernian.

"We want Leigh to score goals for Wolves in League One, just as he has done for Hibernian in the Scottish Premier League, and hope he will help the team to success this coming season."

The offer Hibernian made for Griffiths, who was also named Clydesdale Bank player of year and Scottish football writers' player of the year, has not been disclosed by either club.

And Hibs chairman Rod Petrie has admitted that their hopes of signing the former Livingston and Dundee forward, who has only made one first-team appearance for League One Wolves, had ended.

"Reluctantly, we have to conclude that there is nothing further that can be done at this time to prise the player away from Wolves," he concluded.