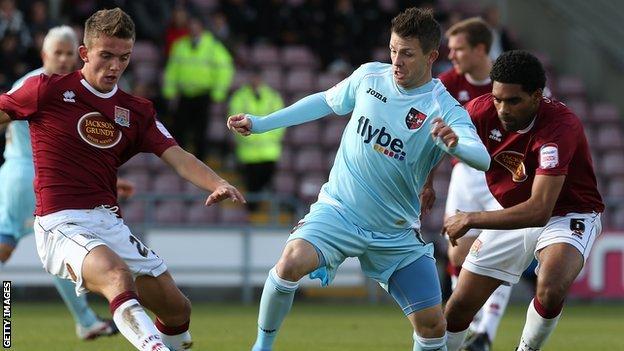 Veteran striker Jamie Cureton has insisted he is not nearing the end of his 20-year playing career.

The 37-year-old signed a season-long deal with Cheltenham Town on Monday, having scored 21 goals in 42 games for League Two rivals Exeter last term.

"The first thing that comes up whenever I sign anywhere is my age.

"People ask if it's my last year, and I understand why, but I feel as fit as I did three or four years ago," Cureton told BBC Gloucestershire.

"I don't think I'll lose my goal-scoring instinct. I'm confident I can keep doing a job for another two or three years."

Bristol-born Cureton made his professional debut for Norwich, on 5 February 1993, at the age of 17.

He spent three years at Carrow Road, before signing for hometown club Bristol Rovers, where he scored 68 goals in 170 appearances.

The forward went on to have spells with Reading, QPR, Swindon, Colchester, Leyton Orient, Barnsley and Shrewsbury, as well as a brief stint in South Korea playing for Busan Icons.

He re-signed for Exeter in 2012 and has now amassed 714 career appearances and 247 goals in England.

"Most people think I look fitter now than I did 10 years ago," continued Cureton. "I'm obviously doing something right and I intend to carry that on and keep playing for a long time.

"I love the game and I don't want it to end. I still treat it like I did when I was a kid. I enjoy the buzz of scoring goals and that's not left me.

"When I lose that, that will be the time I have to stop. Either that or my legs will stop. But at the moment I just love playing and football is my whole life.

Last season's play-off semi-finalists Cheltenham will be the 12th English club of Cureton's career, and he is adamant his ambition has not wavered.

"The focus has to be promotion and that's why I came here," he added. "I don't want to just get by - I want to push on and achieve something.

"It's just about having that bit extra and hopefully I can bring that, along with the other new players that come in."