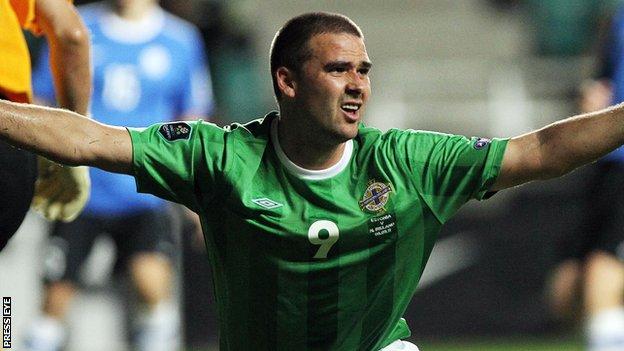 Northern Ireland's record goalscorer David Healy admits he still is not sure where he will be playing next season.

The former Fulham and Rangers striker was released at the end of the season by Bury following their relegation to League Two.

"I have spoken to a few people but nothing stands out," Healy said.

"Clubs will be working out who they want for next season and hopefully I will be what somebody needs."

Healy, who has scored 36 goals for Northern Ireland, is desperate to extend his international career as he is just six games away from reaching 100 caps.

The former Manchester United player knows that reviving his club career would boost his chances of reaching the cherished century.

"I am sure Michael O'Neill would love all Northern Ireland players to be starting regularly for their clubs - but it is not always possible.

"It is Michael's call, he knows what he wants.

"I have achieved quite a bit for my country and I feel I am good enough.

"It is up to me to perform when I do get an opportunity at a club."

Healy, 33, was recently back in Northern Ireland to attend IFA coaching courses.

He said he would like to be a manager or coach in the future - but only after hanging up his boots.

Last November, Healy came on as a substitute to salvage a draw in Northern Ireland's 1-1 draw with Azerbaijan in a World Cup qualifier.

The late free-kick was his first international goal for four years.