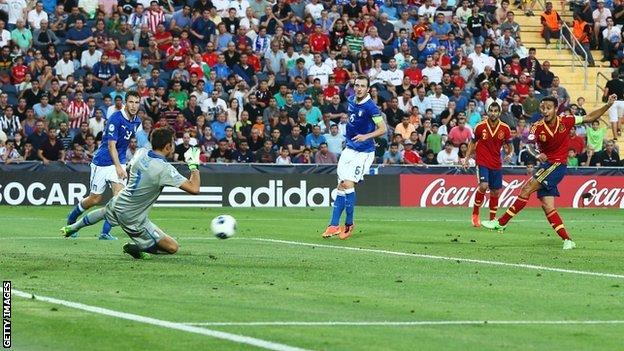 Thiago Alcantara scored a first-half hat-trick as Spain outclassed Italy to retain the European Under-21 Championship.

The Spanish captain was left unmarked to head in early on before Ciro Immobile scored a wonderful equaliser from Giulio Donati's pass.

Thiago restored the lead with a crisp shot and added a third from the spot.

In a flat second half, Isco's penalty sealed the win before Fabio Borini added a late consolation for Italy.

Past Euro U21 finals

Spain's under-21 team has now matched its senior and Under-19s sides in winning consecutive European Championships and the performance of this group in Israel suggests the future is well mapped out.

This was the country's fourth triumph at this level and Malaga midfielder Isco, who is reported to be considering a move to Real Madrid or Manchester City and has been a shining light in this tournament, was once again involved in some of Spain's best passages of play.

The 21-year-old was eclipsed by his skipper on this occasion, but he played his part in the sixth-minute opener when he fed Alvaro Morata, whose cross was met by Barcelona midfielder Thiago with a thumping header.

It was the first goal Spain have conceded in Israel and marked a thrilling opening to the game in Jerusalem.

But 'La Roja' reached the final unbeaten with the type of quick passing and fluid movement expected of the senior side, and it was not long before Italy were under pressure again as Morata and Alberto Moreno tested goalkeeper Francesco Bardi.

Alessandro Florenzi drew a save from De Gea at the other end but Thiago grabbed his and Spain's second when he was picked out by Koke's well-flighted pass.

Italian-born Thiago, whose Brazilian father Mazinho won the 1994 World Cup, then put the game beyond Italy's reach when he drilled in from the spot after Cristian Tello was brought down by Donati.

Italy - who have won this tournament a record five times - struggled to respond, such was their opponents' dominance of possession.

And although Borini added a second Italian goal 10 minutes from time, by then Isco had scored another Spain penalty, his third goal of the tournament making the Liverpool striker's late response academic.