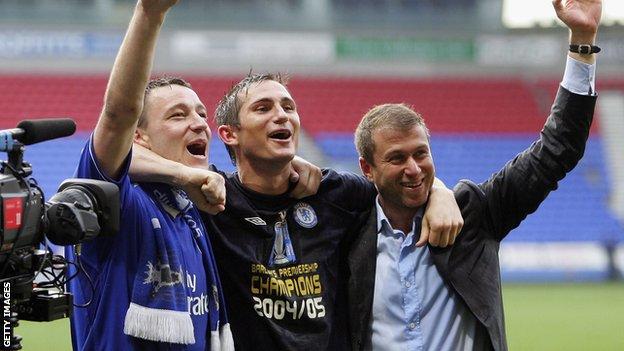 Chelsea owner Roman Abramovich is a "pioneer" who has transformed football in his decade at the club, ex-sporting director Frank Arnesen has said.

The Blues have won three Premier League titles, one Champions League and four FA Cups since the Russian billionaire bought them in July 2003 for £140m.

"I think he has been a pioneer, not only for football in England, but worldwide," Arnesen told BBC Sport.

"He was the first from outside who came in, bought a club and invested money."

Since being bought by Roman Abramovich in July 2003, Chelsea have won:

Abramovich revolutionised Chelsea after buying them from Englishman Ken Bates, spending more than £100m on transfers in his first summer in control on players including Juan Sebastian Veron, Joe Cole and Claude Makelele.

After bringing in manager Jose Mourinho from Porto a year later, the club went on to win their first top-flight title for 50 years in 2004-05.

Other trophies have continued to follow, with Abramovich's approach subsequently replicated by billionaire backers at Manchester City and Paris St-Germain.

"It had never happened anywhere in the world," Arnesen, who resigned from his post at Stamford Bridge in 2010, continued.

"Then you see Manchester City and many clubs with owners from outside, but he was the first who came in, was serious about it, made an impact and wants to do everything - not only for the first team but also the youth and the stadium."

Dane Arnesen was at Chelsea for five years after being drafted in from Tottenham in 2005.

He revealed Abramovich, while not knowing "a lot about football before he went into it", soon took a keen interest in all areas of his investment.

"Sometimes I spoke with him two or three times a week, sometimes you didn't speak with him for a month because he has a lot of other things - he has a big business to run - but when he was in London he'd just show up," Arnesen said.

"He would come with some guys, watch the game and enjoy it.

"He enjoys very much to go to the FA Youth Cup - he'd go the quarter-finals, the semi-finals and the finals. He was always there and would always congratulate us and the staff.

"He was very, very aware about those things and never forgot it. That is something people maybe don't know, but for me that showed he has a big heart for the club."