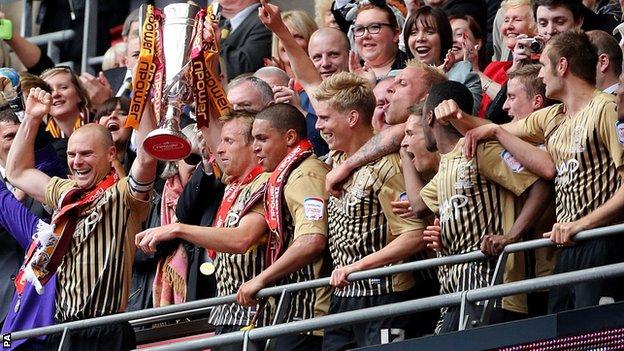 Phil Parkinson's Bradford City will begin their League One campaign after promotion with a trip to relegated Bristol City on 3 August.

Peterborough, who came down with the Robins from the Championship, start with a home game against Swindon, with Wolves making the trip to Preston.

Gillingham, League Two champions last season, will be at home to Colchester.

Beaten play-off finalists Brentford travel to another promoted side, Port Vale, on the opening day.

Rotherham United, runners-up to the Gills in League Two, start life at the higher level with an away game at Crewe.

Coventry City, who are in the process of being taken over by the Otium Entertainment Group and have yet to confirm where they will play their home games this season, start on the road against Crawley Town, while Sheffield United, now with David Weir as manager, are at home to Notts County.

The other opening day fixtures in League One see Carlisle host Leyton Orient, Shrewsbury at home to MK Dons, Stevenage against Oldham and Walsall taking on Tranmere.

The opening league fixtures are followed by the first round of the League Cup, which was drawn last week and will take place in the week beginning 5 August.