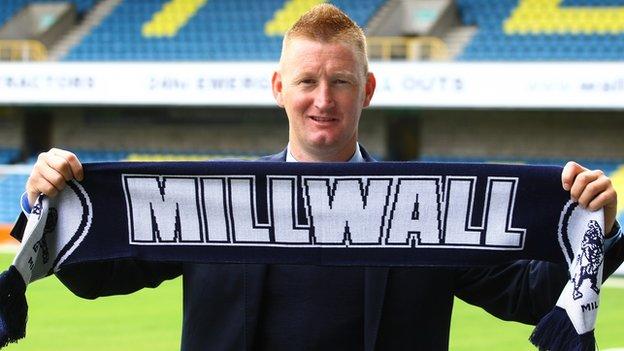 Steve Lomas says he is determined to win over Millwall fans following his appointment as the club's manager.

Lomas, who wants to sign released Norwich striker Simeon Jackson, is unpopular with some Lions supporters, having played for rivals West Ham.

"I want to try and please them by the way we play and the results we get," he told BBC London 94.9.

"You've always got to win people over. You've got to prove yourself and I've got no problem with that."

Lomas left his job at St Johnstone in order to return to London, where he spent much of his playing career.

He succeeded Kenny Jackett, who quit Milwall following the end of last season and has subsequently taken over at Wolves.

The former Northern Ireland international midfielder, 39, had a spell at QPR after making 187 appearances for West Ham during more than eight years at Upton Park.

But he insisted: "What I'd say to the fans is that I'm committed to Millwall Football Club. They're my club now.

"I'm going to give everything I can to get a good team on that pitch that they can be proud of.

"I know what the supporters want. They want the players to give everything, because the fans would love to be out there in the Millwall shirt giving it everything."

As well as the 26-year-old Jackson, Lomas is hoping to bring in a number of other players before the new season starts.

Millwall narrowly avoided relegation from the Championship last term and the new man at the helm knows a tough campaign lies ahead.

"It's a tough, competitive league," he said.

"Certainly what you need are proper men at this club and we've got a few already.

"We'd like a few more, but the boys who are already signed will have a fair crack of the whip to show me that they want to be part of this great club going forward."