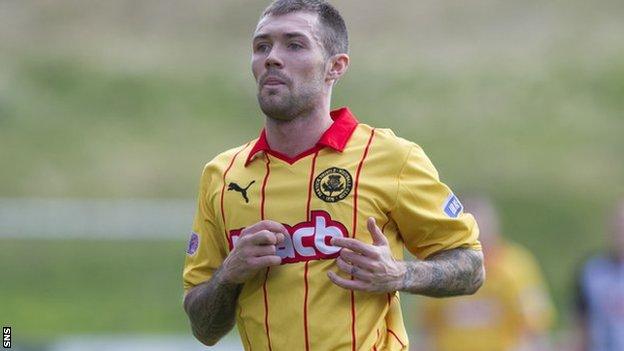 The 24-year-old defender joined Thistle in March after leaving who had gone into administration.

McMillan told BBC Scotland that playing in the Premier League was not the only attraction.

"When Dunfermline went into administration, I was really worried about my future and I tried not to let it get me down.

"I knew Thistle were kicking on and were going to win the league, ."

McMillan, who had made 31 appearances for the Pars before his release, impressed enough in those three Thistle appearances to win a longer-term deal.

Having started his career with Rangers, it was while on loan to Hamilton Academical that the full-back made his Scottish Premier League debut in 2009.

Further loan spells with Queen of the South and Wrexham followed before he joined Dunfermline after being released from Ibrox last summer after only four Rangers appearances.

Now he is hoping for a longer stay in Scotland's top flight with Thistle following their First Division title win.

"I enjoyed my time here towards the end of last season," he said.

"Now the lure of Premier League football is the thing that convinced me to move here full-time.

"Alan Archibald's young with fresh ideas and he's one of the boys. The way he spoke convinced me this was the place for me."

McMillan admitted that the , who followed to Dundee United, was a blow to the Glasgow club.

"That, though, is just part and parcel of football," he added on the club website.

"The manager has already brought in a few players - - and I'm sure that he'll be looking towards bringing in other players as well.

"We will need to go into games with the belief that we can win them.

"Doing well at home will be the most important thing and we had an excellent record at Firhill last season and that's something we will need to try and continue.

"I know people are writing us off already, but we've a young squad of players who will be determined to go out and prove themselves."