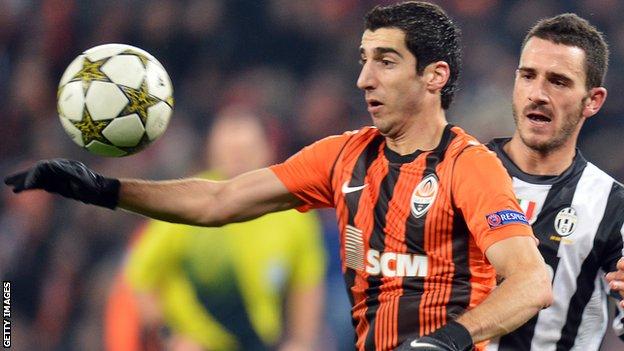 Liverpool are pushing ahead with plans to make Armenian midfielder Henrikh Mkhitaryan their major summer signing.

The 24-year-old is understood to have a £20m release clause in his contract with Ukrainian side Shakhtar Donetsk.

Liverpool have indicated they are willing to meet that figure.

Anfield officials are aware there may be competition for Mkhitaryan, who scored 25 league goals for Shakhtar last season, but are optimistic he can be persuaded to move to Liverpool.

Manager Brendan Rodgers sees Mkhitaryan, who has also been linked with Juventus and Borussia Dortmund, as a key element of his plans to add extra firepower to his side next season.

Mkhitaryan began his career at Pyunik in his home country and scored 30 goals in 70 league appearances.

He moved to Ukraine to join Metalurh Donetsk in the summer of 2009 and, after 12 goals in 37 top-flight outings, was signed by Shakhtar in August 2010.

He has scored 38 goals in 72 league games for the club, and was the Ukrainian top-flight's leading scorer with 25 goals in 29 league outings last season.

Mkhitaryan made his international debut in January 2007 in a friendly against Panama and he has scored 11 goals in 38 appearances for his country to date.

They have offered £8m and, while Sunderland are currently holding out for £10m, the move is fully expected to go through.

On Tuesday, Sevilla's director of football, Ramon Verdejo, revealed Liverpool have made a "good offer" for attacker Luis Alberto, but the Spanish side have yet to accept it.

Speaking with Sevilla's official TV channel, he revealed: "Liverpool's interest in Luis is real, but nothing has been signed. They've made the player a very important offer."

Rodgers has signed Manchester City defender Kolo Toure and a deal in principle for Celta Vigo forward Iago Aspas has been announced.